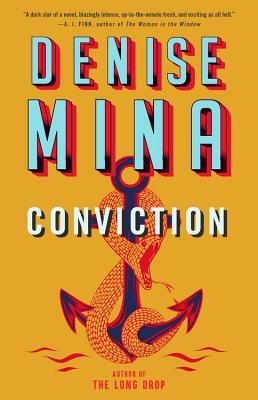 One morning Anna’s husband Hamish arrives at the breakfast table with a suitcase and the announcement that he’s leaving her for her best friend Estelle and taking the kids with him. After their departure, in desperation to get her mind off her grief and fury, Anna carries on listening to the true-crime podcast serial she’d just started, about a triple murder on a yacht in the Bay of Biscay. The case is of especial interest to her since one of the victims was an old acquaintance of hers.

She carries on listening after Estelle’s husband, faded anorexic rock star Fin, arrives on her doorstep seeking some kind of companionship in misery, and even while they travel by car toward the north of Scotland (the Black Isle, where my own family originated). Somehow between the two of them they hatch the idea of trying to solve the old murder case . . .

It took me a little while to realize what Conviction reminded me so strongly of, and then I realized that what I was reading was in effect a 21st-century John Buchan novel. Although the quest eventually takes Anna and Fin far and wide — to London, the Biscay coast, Venice, Paris — it starts off in territory similar to that of The Thirty-Nine Steps; the mismatched-couple trope strongly echoes Hitchcock’s screen adaptation in particular.

And, like the best of Buchan, Conviction is a whale of a page-turner. To be sure, one reason my pages were turning so swiftly was that if Messrs Mulholland had used any larger a font this copy of the book could have rivaled the large-print edition, but truly I was so totally bound up in events, and driven on by them, that I read ridiculously late into the night.

The denouement, when it came — the solution to the crime and the downfall of the extremely powerful, psychopathic, black-widow-type character at the heart of it all — was ingenious and, at least to me, unexpected. That said, it struck me as being treated a little too patly: what should have been something that bowled me over sideways elicited just a shrug, perhaps because there’d been so little by way of clued build-up to both the mystery’s solution and the engine that brought about the baddies’ downfall. Earlier I had that same sensation of patness when a reluctant witness capitulated, it seemed to me, ‘way too swiftly and completely: “I refuse to talk to you at all; oh, all, right, here’s my complete account, naming names, of the skullduggery that went on.”

Yet Anna and Fin, despite being exasperating a lot of the time, are entertaining protagonists whose company I hugely enjoyed, and the plot in general (including Anna’s backstory, which I’ve not mentioned here even though it’s an important driver of the plot) is satisfyingly serpentine. The best of various setpieces — and Mina/Anna even heralds it with a flourish of trumpets as such — occurs when our heroes are trapped on a transcontinental train with not one but two completely ruthless smiling hitmen. (Where earlier, in Venice, I’d been Not Looking Now, here I was waiting for a lady to vanish . . .)

As I say, a tremendous ripping yarn, and one that’s reminded me I must finally get round to reading (in most cases rereading) those John Buchan classics I nostalgically downloaded as ebooks yonks ago from Project Gutenberg.