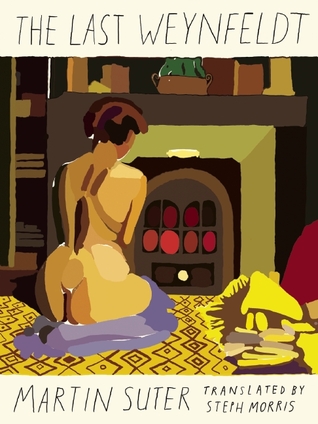 In Zurich Adrian Weynfeldt lives a largely solitary life. Possessed of enormous inherited wealth and paid healthily for his work as an art appraiser for a major auction house, he has acquaintances rather than friends, and almost all of those acquaintances are essentially spongers, tolerating his presence because of the ungrumbling way he subsidizes their activities.

Into his life stumbles Lorena, a petty thief and occasional model who happens strongly to resemble Adrian’s long-lost love, Daphne. When Lorena realizes how ripe a fruit Adrian is for the plucking, she conspires with her criminal boyfriend Pedroni to rip him off for as much as they possibly can. Their scheme involves persuading him to authenticate as genuine a painting he has discovered to be a forgery (more accurately, a faithful copy now being presented with intent to deceive), a replica of Félix Vallotton’s Femme Nue Devant une Salamandre (as depicted on the cover). Adrian must steward a duel between his own sense of integrity and his desire to see no harm befall Lorena . . .

Although a couple of the review quotes on the cover depict this as a suspense novel, that’s not at all where it’s at. Instead it’s a deliciously whimsical tale of love and redemption, of an almost childlike honesty confronting corruption and, through ingenuity, coming out on top. To be sure, it’s a fable: I don’t think we’re ever supposed to believe that someone like Adrian could exist, however much we might want him to. Meanwhile, even though Lorena is by any definition you care to choose A Bad Girl, she’s so affectionately depicted that it’s hard not to become fond of her. There are some very finely wrought depictions among the supporting cast, too, notably of Adrian’s assistant, Véronique, his housekeeper, Frau Hauser, and Strasser, the jobbing painter cursed with incredible technical skill matched to a complete lack of flair who created the Vallotton copy.

The Last Weynfeldt also raises in passing a question that was raised in another novel I read recently set in the art world,Anne-Laure Thiéblemont’s The Collector: is the distinction between an original artwork and a copy or forgery of that artwork an aesthetic one, an ethical one or simply a commercial one? Both novels seem to hover over the third answer as representing the truth of the matter, that without the international art market we’d be as happy to have a Picasso copy as a Picasso original hanging on our wall. I’m not sure I know where my thoughts lie on this!

The text dances along frothily (translator Steph Morris clearly deserves a share of the credit that this is so) and is quite often funny enough that it made me laugh aloud — as on the various occasions when Adrian tries to demonstrate to Frau Hauser that he’s perfectly competent to manage his household without her. There’s a muscularity about the prose, too, and a serious intent underlying the fabulation. Suspenseful the novel ain’t, as noted, but I resented having to put it down when other aspects of life intruded and picked it up eagerly again as soon as I could. And I grinned at the way Suter so skillfully pulled everything together at the end to present an emotionally perfect finale. A delightful piece of work.