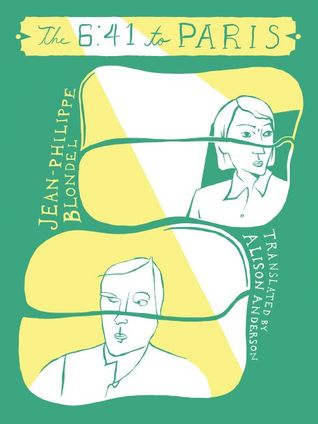 A short novel with a very simple fundamental premise; what makes it so appealing — compulsive reading, indeed — is the execution.

Early on the Monday morning following a weekend spent looking after her aged parents, 47-year-old Cecile Duffaut boards the commuter train to Paris. Even though the train’s fairly crowded, the seat next to her remains empty — at least until the last moment, when a late boarder plonks himself down beside her. To her horror Cecile recognizes him as the boyfriend who humiliatingly dumped her during a week in London together when they were both twenty, Philippe Leduc.

He recognizes her, too.

Back in those days, Philippe was The Boy Most Likely To, while Cecile was the somewhat mousy girl with whom he’d inexplicably taken up. In the years since then, fortune has treated them very differently. Cecile is now highly attractive and a hugely successful businesswoman, the entrepreneur behind a chain of stores selling upscale beauty products. Philippe, by contrast, is a washed-up, bepaunched and balding failure who’s essentially made nothing of his life. He’s a man whose main claim to fame is that the easily dismissed sidekick of his youth, Mathieu, the one all the girls ignored, later became famous as a screen heartthrob.

For almost the entirety of the 95-minute journey the pair determinedly refuse to acknowledge each other, but their minds can hardly help but be full of memories of the time when they were together . . . and their times apart since. And it’s those thoughts that the novel recounts, its chapters alternating from one of the two reluctant travel companions to the other.

In less skilled hands (and obviously translator Alison Anderson deserves credit here too) this might seem to be a recipe for boredom, but in fact The 6:41 to Paris offers a really quite exhilarating ride, not just through its exploration of the two characters’ backstories but also in its gradual teasing-out of the fact that the dreadful bustup in London has shaped the divergent courses their lives have since taken.

The US release of this novel is in one of those lovely New Vessel Press editions, which adds to the pleasure of reading the book.