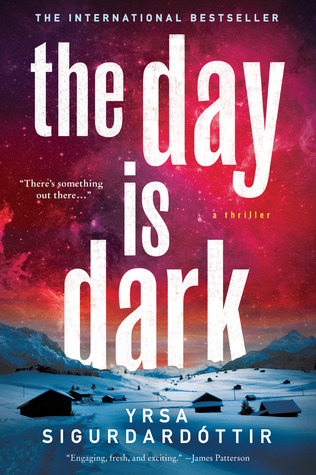 Yrsa Sigurðardóttir’s series character, Icelandic lawyer Þóra Guðmundsdóttir, is roped in by her banker boyfriend Matthew to go with him and a group of others to a remote mining site in Greenland to investigate, for insurance purposes, a series of odd and possibly murderous events there. The visitors soon find that hostile weather and sabotaged communications equipment make them virtual prisoners, and matters aren’t helped by the fact that almost all of the Greenlanders who live in the nearby settlement refuse even to acknowledge their existence. The site, according to the locals, has been erected on an area of cursed land where once there was a village whose inhabitants all died in mysterious circumstances in the early twentieth century.

There are mysteries of the present, too. Why are there old human bones in so many of the site offices’ desk drawers? What’s happened to the two drillers left behind as a skeleton (no pun intended) crew to keep the site ticking over while the rest of the staff were away? Does an enigmatic video clip really show one of them being hacked to death?

The novel’s setup reminded me of similar situations in science fiction, where our plucky but quarrelsome band of spacefaring heroes must investigate why the entire population of a colony on a planet that’s been certified as safe has disappeared, or why there’s no one but a few corpses aboard a drifting spaceship. Sigurðardóttir does manage to create in the early stages of the novel that same atmosphere of claustrophobia, of a menace that seems all the more fearsome because its nature is completely unknown — alien, even. Are the villagers right that the souls of the dead, of those people who died over a century ago, are maliciously stalking the living who dare to occupy their territory? To Þóra and her companions, despite their twenty-first-century sensibilities and rationalist educations, there are times when that explanation seems all too probable . . .

After the highly promising setup, however, everything seemed to me to go downhill. To call the text prosaic would be to commit an error of charity: it plods and lumbers along with all the earnestness of a conscientious teenager’s Eng Lit essay. The words are individually perfectly correct, they’re in more or less the right order, and the sentences mean what they’re supposed to mean (although see below), but the result is lifeless, sparkless and turgid. When I came to “He emitted a dry and mirthless laugh” on page 249 I can assure you, dear reader, that I . . . well, emitted a dry and mirthless laugh. It wasn’t that this example was in itself especially egregious; it was just that it seemed to cap a whole hell of a lot of similarly dreary stuff.

I obviously can’t tell if it’s the translation or the original text that’s at fault here; that said, it’s certainly not the translator’s fault that The Day is Dark is at least fifty percent longer than it should be.

Philip Roughton’s translation seems technically accurate, despite any flourish it might lack, except in one instance that I noted of confusion on either his part or the copyeditor’s:

These toxins are persistent organic pollutants that do not degrade in nature, so they accumulate in the food chain and more often than not wind up in the sea. They are found in more plentiful quantities the higher they go in the sea’s food chain, so they occur in the greatest quantity at its surface. [pp229-30]

Obviously what Sigurðardóttir intended to say, and presumably did in the Icelandic original, was that the toxins become more prevalent the closer you get to the top of the food chain, not the shallower the creature’s habitat.

This is the second of Yrsa Sigurðardóttir’s Þóra Guðmundsdóttir novels that I’ve read and, glancing back to my notes on my first experience of the series, Ashes to Dust, I see that back in January 2018 I came to very much the same conclusions I’ve come to here. Both novels seem to me grossly overblown and clumsily written and/or translated. I think that in future I’ll stick to the screen adaptations of her work, such as the excellent Ég Man Thig (2017; vt I Remember You).