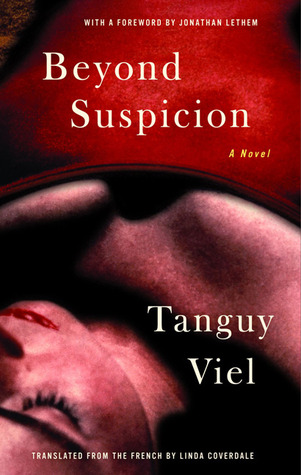 One of the review quotes on the cover of this short book says it reads like a Raymond Chandler novel, a comment of maximal piffledom; I guess the unnamed reviewer has the excuse that s/he was writing for a French literary magazine, rather than an Anglophone one, but even making that allowance may be overcharitable. There isn’t a private eye in sight; there’s no mystery to be solved; there isn’t a nest of plot strands that prove eventually to be interrelated; and so on and so on and so on. No one even gets beaten up, by the cops or otherwise.

Perhaps the reviewer was thinking of Jim Thompson and merely, in a moment of absentmindedness, wrote down the name of the wrong American hardboiled writer? Because that‘s a comparison that could be justified — certainly in terms of the plot and, at a bit of a stretch, in terms of the writing style.

Lovers Sam and Lise are a pair of grifters. Lise is a “hostess” at a dubious niterie — the most popular of the girls there not just because she’s the prettiest but because she’s the one who’s renowned for not actually putting out for the customers: she’ll be their companion for the evening but draws the line there.

Among her regulars is wealthy, widowed auctioneer Henri. Between them Lise and Sam hatch the idea that she should coax Henri — who in the event requires not much coaxing — into marrying her so that later, after he’s had a little accident, she can inherit his fortune. Until then Sam will pose as her loving brother so that no one will think to question the amount of time the pair spend together: after all, in the guise of her brother he’s surely beyond any suspicion that he could be her lover.

But then there’s a modification of the plan. Lise, who’s by far the dominant member of the partnership with Sam, stages her own kidnapping. Sam sets up the drop, requiring Henri to deliver a packet containing a million euros to a remote site. Surely there’s nothing could go wrong . . .

The Thompsonesque nature of the tale is evident from the above summary. What are far less obvious are the parallels in terms of the telling. Viel gives us his tale entirely from within the mind of the none-too-bright grifter Sam. I’m vaguely tempted to call it a stream-of-consciousness narrative but it isn’t, not really. Instead it’s a very carefully controlled impressionistic use of language, using words like daubs of paint to create a vibrant picture even if not every word/daub might stand up to individual scrutiny. Thompson’s prose sometimes has a similar impressionistic feel to it as we explore the thoughts of his often loathsome narrators. Viel and Thompson otherwise have very different voices, but in this respect they’re not so very dissimilar.

A major difference is that Sam, while pretty much a bottom-feeder, is nowhere near as loathsome as his Thompsonesque equivalent might be. We can actually sympathize with him, especially toward the later stages of the tale.

It took me a dozen or more pages to acclimatize myself to Viel’s writing style (as luminously rendered into English by Linda Coverdale), but I felt the investment of effort was well worth it as I raced through the rest. The beautifully produced New Press edition I devoured had a foreword by Jonathan Lethem that I remember enjoying a lot as I read it even though, by the time I got to the end of the novel, I’d forgotten most of what Lethem had said: my bad.

This is a very short book — like many of Thompson’s, another parallel! — yet by the time of its ambiguous ending it has packed as much of a punch as many a far longer novel. Definitely recommended.

Incidentally, my spellcheck insists that by “hardboiled” I mean “charbroiled.” I kinda like it . . .