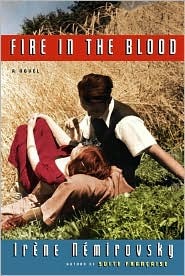 In 1942, Ukrainian immigrée Irène Némirovsky was shipped off from her home in France to Auschwitz, where she died of typhus, aged 39; a few months later her husband met a similar fate, being transported to Auschwitz to be murdered by the spiritual ancestors of the MAGA crew.

By the time of her death Irène was a successful novelist in her adopted country, although in the prior few years things had been getting more difficult for her writing career, because of her Jewishness. The novel she was working on at the time of her arrest by the Vichy police — really not so much a novel as a shortish novella — was Chaleur du Sang. For many years it was regarded as having been left as just a fragment; in the early 21st century, with interest in Némirovsky’s work at a peak, a complete manuscript was discovered, and in 2007 veteran Némirovsky translator Sandra Smith rendered it into English as Fire in the Blood.

And three cheers to her for having done so. This is a really quite exquisite little fiction that both paints a picture of a community and an age and undercuts our complacency that we’re fully understanding what we’ve been told.

The setting of Fire in the Blood is essentially Issy-l’Évêque, the small town in the Burgundy region of France where Némirovsky and her family sought refuge in the final years of her life. The novel tells of the elderly Sylvestre/”Silvio”, his cousin Helene and Helene’s husband Francois, their daughter Colette and Colette’s husband Jean, the enigmatic Brigitte Declos, plus Colette’s lover Marc. It paints a portrait of the locals — the paysans — in the years following World War I. They’re a libertarian lot, a community that would rather see a murder go unpunished (as they in fact do) than bring in detested outsiders such as the authorities. What happens in the village stays in the village seems to be the ethos.

If that were all we were given, Fire in the Blood would still be a beautiful piece of work. The narrative style (which I believe has been accurately translated by Smith) has a sort of surreal, magic-realist feel to it, even though the content has nothing to do with surrealism or magic realism. When Némirovsky’s characters speak to each other their dialogue is somehow brighter than any reality could shine, as if to improve on naturalism. The characters have that same quality of hyper-reality: I don’t think I’d recognize any of them in the street, because Némirovsky doesn’t give us much by way of physical description of them (or, if she does, it’s so superficial that I’ve forgotten it), yet she creates them fully enough that I might well recognize who I was speaking to if one of them phoned me up or started talking to me as a stranger at a party.

So, a wonderful portrayal of an eccentric community and a cast of vivid characters. There have been plenty of excellent novels based on nothing more. Yet Fire in the Blood delivers something else, too. Like a neonoir movie or a modern psychological thriller, it reveals in its latter pages that a lot of the assumptions we’ve been making about the relationships between the novel’s various characters have been ill founded — that in effect we’ve got a lot of the tale’s dynamics wrong. Némirovsky (with Smith’s aid) handles this transformation of our perception so beautifully that, once I realized what was going on, I had to put the book down briefly in order to applaud.

Natch, I’m going off to see if I can hunt me down some more Némirovsky. Oh, look, my library system has an omnibus volume containing David Golder, The Ball, Snow in Autumn and The Courilof Affair. I may be forced to . . .

4 thoughts on “book: Fire in the Blood (trans 2007 Sandra Smith) by Irène Némirovsky”