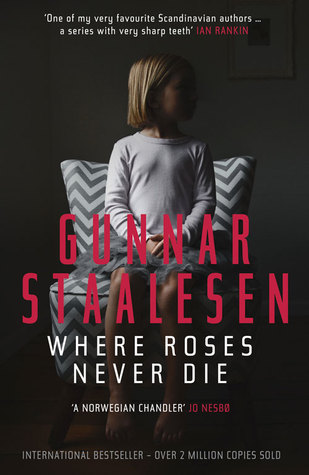 Nearly twenty-five years ago toddler Mette Misvaer disappeared from the sandpit in which she’d been happily playing. Although the police have never officially closed the case, it’s safe to say it’s no longer active; besides, almost all of the cops who were involved in the case have since retired, so there’s no one left with a personal interest in it. Accordingly, with the crime’s statute of limitations about to expire, Mette’s mother comes to PI Varg Veum and asks him to investigate the disappearance in the desperate hope that she might at last find out what happened to her daughter.

Varg digs out out some pretty embarrassing stuff about the adults — including Mette’s parents — who shared the small housing co-op from which the infant vanished. He also discovers there’s a very tangential link between the old mystery and a new one, an armed robbery in which one of the robbers shot and killed a passer-by who just happened to have been, back then, another of the co-op parents. Varg eventually manages to solve not just the cold case but also, almost by accident, the more recent robbery/murder . . . and yet another case, the crime (or series of crimes) that lay behind the robbery/murder.

In one of this edition’s cover quotes, Jo Nesbo calls Staalesen “a Norwegian Chandler,” and for once the description’s deserved. The novel follows the Chandler template whereby a number of crimes prove to be interrelated, and I’d say that in bringing this about Staalesen actually interweaves his plot strands with greater skill than Chandler generally did: everything falls into place perfectly, and we’re not left wondering at the end who the hell it was murdered the chauffeur. Again, there are Chandleresque tropes such as the interviewing of oodles of people connected with the crime, each interview extracting not just some piece of information whose importance we later discover but also a vivid character portrayal of the interviewee. And there are some nicely Chandleresque turns of phrase:

The coffee looked black and bitter, like a poisoned chalice from the beyond served by a brimstone preacher on the first Sunday of a fast. [p89]

Don Bartlett’s translation is fundamentally excellent but could certainly have done with a rather more rigorous copyedit. I’m not talking about just the odd grammatical woopsie/typo but about occasional careless minor translation errors: a “his” where a “her” is meant, for example, and in one instance “a children’s home” for what must certainly have been intended as “his childhood home” — stuff like that.

I’ve watched all twelve of the Varg Veum movies/TV movies, and enjoyed them greatly (the first series of six most especially), but astonishingly never quite managed to read any of the novels until now: trust me to start a series at #18. Varg is here approaching 60, whereas the Varg I “knew” from the movies was perhaps half that age. That caused less of a dislocation than you might think: although circumstances and the waist measurement have changed, he’s still recognizably the same guy, with the same character failings and the same sterling qualities. I’m sure I’ll be back for more of his adventures.