An unnamed diner (Colman) sees Joan Robinson (Lansbury) arriving at a table on the far side of the restaurant where he’s seated with his lovely companion Laura Green), and takes the opportunity to tell Laura about Joan’s backstory.

Joan was governess to the family of pretentious socialite Edythe Livingstone (Forbes). Invited to one of Edythe’s parties to make up the numbers, Joan wore her string of cultured pearls—worth at most fifteen shillings. Star party guest and renowned gems expert Count Borselli (Macready) for fun told the assembled snobs that the pearls were, in his educated opinion, worth at least £60,000. At once Society, including her employer, assumed Joan was in reality not the working-class orphan she claimed to be but an aristocrat fallen on hard times.

Ronald Colman as the narrator.

When the truth emerges—that Joan really is the working-class orphan she claimed to be—Edythe fires her, Joan’s newly acquired uppercrust fiancé Peter Jeffries (Randell) unceremoniously terminates the relationship, and on, and on.

For the most part the satire isn’t too explicit, but sometimes it comes bubbling to the surface, as when the cad Peter dumps her:

Peter: “My dear, if nothing else, I hope I’m always a gentleman.”

This adaptation of Maugham’s short story is generally listed as an episode of Four Star Playhouse (although it doesn’t fit the format of that show), and the biggest attractions for aficionados of this site (if such exist) are Angela Lansbury (of course) and director William Cameron Menzies. The story has been adapted for TV on several other occasions, including once as a full-length feature:

(For obvious chronological reasons the Gaston Méliès short A String of Beads [1912] is unconnected; it’s in fact a Western.) 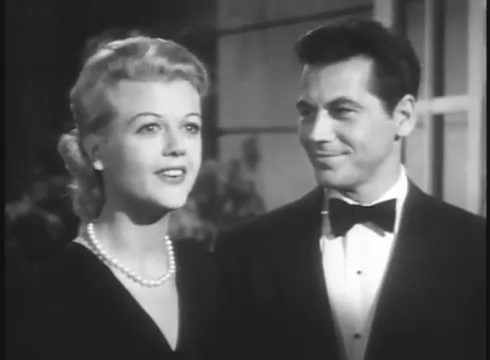 Angela Lansbury as Joan and Ron Randell as Peter.

It’s perhaps a judgment of this adaptation that the figure who sticks most in the mind is likely to be Dorothy Green’s Laura, there solely as a fleetingly seen sounding board while Colman’s unnamed character (Maugham himself?) tells his tale. Lansbury and Colman are just fine in their roles without really stretching their abilities; among the minor parts, Nigel Bruce delivers his usual turn as party guest Nigel Bruce, in this case identified as Colonel Mournay. William Cameron Menzies’s direction and George E. Diskant’s cinematography are as stylish as you could hope for.

Angela Lansbury as Joan (you already knew that, didn’t you?) and George Macready as Count Borselli.

This particular adaptation of Maugham’s “A String of Beads” delivers its satirical point succinctly and with an admirable smoothness. (I’ve yet to see the other versions, so have nothing against which to compare it.) But, for a 25-minute short, it manages to pack in quite a lot of comment on the way that even today we tend to judge people by their claimed apparent net financial worth (even if they fail to offer tax returns in support of their claims!) rather than their real worth: their integrity.