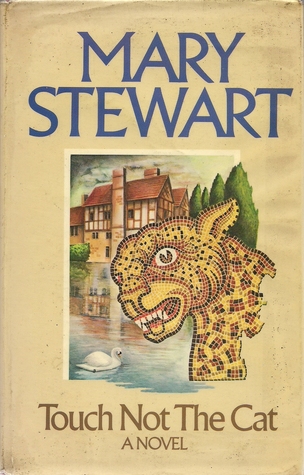 Bryony Ashley, aged 22 and currently the last in her branch of an uppercrust English family, has experienced telepathic episodes since childhood; it’s a family trait, apparently. In particular, she frequently exchanges thoughts with an unidentified “lover” whom she assumes to be one of her second cousins. It’s this “lover” who sends her a warning that her father, recuperating from illness in a Swiss sanitarium, is in dire straits; when Bryony gets there she finds that her dad’s dead, victim of a hit-and-run. As he died, he left an enigmatic warning for her, one that doesn’t make a lot of sense to her but involves a “cat in the pavement.”

The rest of the book sees her dealing with her family’s complicated inheritance, especially as regards the decrepit, money-pit pile that is the family home, while trying to interpret that jumbled warning. In the process she encounters various cats (or, rather, red herrings) and at last unveils the identity of her “lover.”

I’ve always enjoyed Stewart’s brand of romantic suspense (more, oddly, than I enjoyed her Merlin series). This one, with its admixture of a paranormal theme, is a bit different from the others I’ve read. It took me a little while to adjust to that theme, which for the first portion of the book seems simply an unnecessary nod to the preconceptions of the day; there’s an embarrassing sequence where Bryony’s local vicar, speaking more to the reader than to Bryony, claims that “everyone knows” telepathy exists. However, after a while, I began to admire the way that Stewart was using the paranormal aspect as an integral element of her plot, thereby enriching it.

The attitudes toward sex are oddly dated. On the one hand, there’s the typical 1970s nonjudgmental recognition that people do go to bed together without the benefit of clergy, so to speak; on the other, there’s a sort of cloying coyness when it comes to Bryony herself and, once she knows who he actually is, her lover. For Bryony is far less of an independent gal than the usual Stewart heroine, such as Nicola in the earlier novel The Moon-Spinners (1962). Even though she displays some undoubted resourcefulness and pluck toward the (very exciting) finale of the book, until then she seems a little passive, as if more 1950s than 1970s. This isn’t to say that she’s an unbelievable Barbara Cartland-style heroine, just that a younger author (Stewart, although in many ways very progressive, was 60 in 1976) might at the time have portrayed her differently, and I think just about any author would do so today.

Bryony aside, there’s lots of sly characterization (plus a couple of sly smutty jokes) among the supporting cast. I especially liked the depiction of Mrs. Henderson, one of the tenants of the Ashley estate: she’s genuinely good-hearted yet holds some ideas that are, without her recognizing them as such, abominably bigoted. Bryony’s gentle demolition of these is neatly done.

Despite any minor reservations I might have, Touch Not the Cat is a rollicking good tale very well told.

Incidentally, the title comes from the modernized spelling of the motto of Clan Chattan, “Touch not the catt bot a glove,” the cat in question being a Scottish wildcat, and thus notoriously fierce. I’d always thought, because taught this at school as a nipper, that this should be read as “Touch not the cat but [with] a glove,” the “with” being for obscure reasons tacit. Stewart informs us, though, that the “but” isn’t our ordinary English word but is derived from the word butan, meaning “without.” A quick check of Chambers confirms both this obsolete meaning of the word “but” and the derivation. So I live and learn.