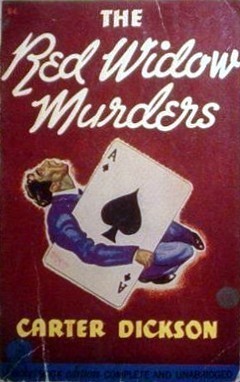 Not so long ago the young Lord Mantling inherited his title and the family estate, and soon his townhouse in London is due to be pulled down. This means he can open a room that’s been boarded up for years, a room that the terms of inheritance insist must be kept sealed until such time as the house is demolished . . . a room in which over the past century and more a succession of people have inexplicably died within two hours of being left there alone. Mantling assembles a party of family and friends and they draw cards to choose who will be the one to spend two hours in that room. Also present are three disinterested observers, one of whom happens to be Sir Henry Merrivale, H.M.

The “winner” of the draw is a mild-mannered man called Bender, whom no one really knows. He enters the room at 10pm and the rest of the company, ensconced at the dining table nearby, sing out to him every quarter-hour thereafter to check he’s still alive. Not long before midnight and the expiration of the two hours, he’s discovered to be dead of curare poisoning. Yet it’s clear he died long enough ago that the last two or three of his responsive shouts must have been emitted after he died. Moreover, the room reveals no mechanism whereby he could have been poisoned.

What seems to be a locked-room mystery is partly modified by the almost immediate discovery that the room wasn’t as sealed up as it might have appeared. Even so, the murder appears to have been an impossible one. Chief Inspector Humphrey Masters produces what at first seems a fairly watertight explanation of how the killing could have been done but in his habitual fashion H.M. soon demolishes Masters’s reasoning. And it is of course H.M. who eventually solves both this murder and the ancillary one that follows it.

I wouldn’t say this is top-flight Carr — for one thing, H.M.’s explanation depends on an error of omission being committed in the post mortem — but it’s tremendously entertaining, and has some wonderfully atmospheric moments.

The Red Widow of the title refers to Madame Guillotine, and we find that the history of the room is entwined with that of the Sanson family, hereditary French executioners. Carr/Dickson gives us a fairly extensive flashback account of the adventures during the Terror of one of the room’s early victims, and clearly relishes the opportunity to explore this gory period of history. This section is one of the highlights of the book.

If you’re unfamiliar with Carr’s work, The Red Widow Murders, a page-turner that’s packed with Carr’s customary ingenuity and a good measure of humor, might be as good a place as any to start.