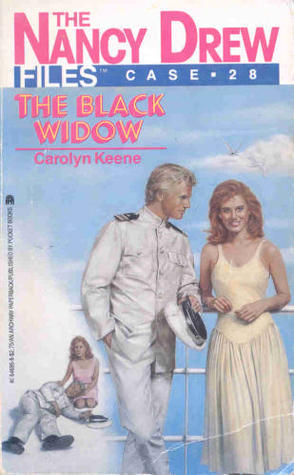 My first experience of a Nancy Drew novel, this is #28 in the spinoff Nancy Drew: Files series featuring a rather older Nancy (she’s 18 here). The Black Widow was published in 1988, long after the original Carolyn Keene, Mildred Wirt Benson, had ceased contributing to the saga.

And, to be honest, I found the book rather fun. This is the kind of novel that’s ideal to have with you if you get stuck in an airport or on a long bus journey . . . although you might have to invest in two or three from the series if that bus journey is of any significant duration, because the book’s pretty short.

Nancy and her dad Carson go on a cruise that will take them to Rio in Carnival season, where they’ll be met by Nancy’s regular fella, Ned. Almost as soon as they board the cruise liner it becomes clear there’s something awry. Fellow-passenger Nina da Silva, a widow but not the widow of the title, gets an anonymous gift of a box of chocs containing also (the box, not the chocs) a writhing mass of black widow spiders. (I can’t remember if the Monty Python team included this flavor in their selection.) Nancy herself finds a spider-related puzzle pushed under her cabin door, then later a bouquet of flowers with a note suggesting these are for her funeral. Of course, Dad for the longest time is convinced there’s a perfectly natural explanation for all this, especially since his real interest seems to veer toward romancing the lovely widow.

Meanwhile Nancy has romance-related hassles of her own, being caught up in rebuffing the attentions of a handsome young ship’s officer who makes plain that his hopes go beyond the merely platonic. The name of this smooth-talking stinker is, I kid you not, Randy Wolfe.

Most of the chapters end in cliffhangers and appropriate exclamation marks, as Nancy is threatened in darkened rooms, gets trapped snooping in places she oughter not to be, has a knife put to her throat, discovers a motorcyclist riding at full-tilt down the street toward her — all that sort of stuff. There’s a bit of breathless hysteria about some of the writing — we’re not talking Anita Shreve here — but that’s not in any way out of place: very in place, in fact. The focus is less on mystery and detection — the spider cypher is solved rather easily in the end, and in a sort of offhand manner — and more on thrills and spills, with a cablecar finale that has its genuinely exciting moments.

So: More fun than I’d expected. In the unlikely but not inconceivable event that I decide to read further Nancy Drew tales, I see I have plenty to choose from, with 175 novels in the original Nancy Drew Mystery Stories series and 124 in this spinoff series. There’s also a whole bundle of other, non-Nancy Drew novels by Mildred Wirt Benson on Project Gutenberg. And I have a biography of Mildred Wirt Benson somewhere on the shelves that I’ve been planning to read for years . . .