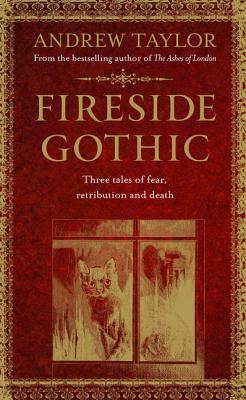 Three novellas that have in common that they’re ghost stories but, more important for this reader, that they’re superb pieces of storytelling. There’s a sense of M.R. James about them (indeed, I spotted a “visual quote” from James at one point, albeit involving a cat rather than a dog, and there could easily be others I missed), but the style is reminiscent, too, of other, non-Gothic UK writers like Eric Ambler and Graham Greene. If you’re in search of formulaic ghost stories, complete with yer frissons of horror an’ stuff, you may find this collection disappointing; only one of the three tales has a sequence designed to frighten, and it’s not because of a ghost that it’s terrifying. As I say, it’s the storytelling itself that’s front and center here.

Set in the years leading up to World War I, “Broken Voices” sees two young adolescents stuck over the Christmas break at their Cathedral school. One of them, a chorister whose voice is breaking, is desperate to salvage his good name by rediscovering a long-lost piece of bell music written by a composer who fell to his death in the cathedral before the piece could be performed. There’s a sequence in the story that scared the pants off me, and also a truly nauseating account of an afternoon spent ratting. A very satisfying tale, with primary characters it’s easy to identify with and a supporting cast of Dickensian types — in fact, now I think of it, there’s something Dickensian about the tale as a whole.

“The Leper House” tells of a man lost in a storm on the way home from a funeral who’s given shelter for the night at the home of a strange mother and daughter, and who finds some unanticipated solace in the arms of the woman who’s living in squalor in a ramshackle cottage that neighbors their property — the Leper House of the title. In the morning, though, it becomes apparent that all was not as it seemed. (And, no, nobody’s a leper.) For me this was the strongest tale in the collection, although I’m not one hundred percent sure its explanatory denouement altogether makes sense.

In “The Scratch” we meet a middle-aged couple who invite the husband’s nephew to their home in the Forest of Dean when he returns from service in Afghanistan with PTSD that takes the odd form of a phobia for cats and a detestation of sleeping in a confined space. And there’s an odd scratch on his arm that just won’t go away . . . There’s one important plot point here that I couldn’t quite credit, but otherwise this was again a very strong tale — and, like the others, beautifully told.

Taylor’s prose had me in its grip more or less from page 1 until, with a sigh, I finished the book. It has a kind of musicality to it, a sort of symphonic rhythm that I found immediately captivating. I must make the effort to lay hands on some of his novels.