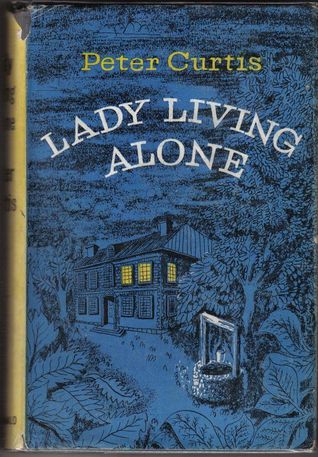 I’d forgotten until reminded recently that, relatively early in her career, Norah Lofts wrote four novels that could be loosely described as suspensers under the pseudonym Peter Curtis; in fact, one of them, You’re Best Alone (1943), is mentioned in my Comprehensive Encyclopedia of Film Noir as the basis for the Elizabeth Sellars vehicle GUILT IS MY SHADOW (1950).

Lady Living Alone sees midlist novelist Penelope Shadow suddenly strike lucky in her mid-thirties with her latest novel. She decides to use her newfound riches to buy a house of her own in the country; to run it she hires a young man called Terry Munce. At first she doesn’t mind too much as he takes over her life more and more; what she doesn’t realize is that, beneath his charm, he’s entirely mercenary — a fluent liar, an embezzler, a thief, a cheat, an adulterer and potentially worse.

But Miss Shadow has all her life been something of an eccentric little goose, relying on her prettiness to make sure others accept the responsibility for saving her from the worst consequences of her muddleheadedness. She is therefore not at all blameless when things go south: she has spent her whole life molding herself into the ideal victim for some questing leech like Terry to come along and latch onto. At the same time, for all her sillinesses and neuroses, there’s something very likable about her — at least for this reader — and so, in the latter part of the book, the tension mounts as we pray she can extricate herself with life and limb intact from this mess she’s gotten herself into.

The former part of the book, by contrast, is pretty slow-moving, being more of a socially observant, gently satirical comedy of manners full of waspish little lines like this:

Some of the cattiness descends into mere snobbishness — the working classes tend to be regarded as uniformly slow-witted or mendacious or both, very much the “lower orders” — but I suppose this was to be expected in a novel of its era, written presumably just before the end of World War II and the consequent social upheaval in the UK that changed a lot of attitudes. Leaving that complaint aside, this first half of the novel felt to me rather Jane Austeny.

So, a book of two somewhat unalike halves, and one that therefore will I’m sure not be to every reader’s taste. I did grow slightly impatient with the first half, and with Miss Shadow’s ditheriness in it (while at the same time hugely admiring her monomania when it came to writing!), but overall I enjoyed Lady Living Alone really quite a lot.