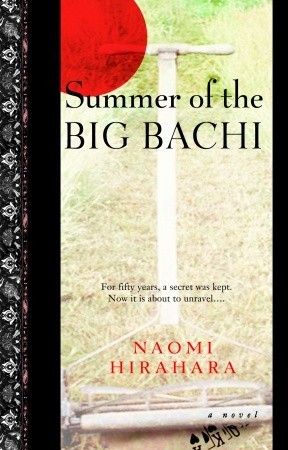 A novel that I decided to read because I noticed that Hirahara was nominated for one of the major crime fiction awards (I now, natch, forget which) for her most recent episode in the series. I thought I’d give the first in the series a try.

To look at Mas Arai you’d think he was just another Japanese-American gardener scratching a living in the LA region. But Mas was in Hiroshima fifty years and more ago when the atom bomb went off, and he bears the psychological scars to this day. In particular, he’s still consumed by guilt over what he perceives as his own grave moral lapse during the immediate aftermath of the detonation in failing to honor a commitment to a dying friend, Joji. He’s been expecting bachi — fate’s payback for his crime — to come by and now, all these decades later, it seems to have done so.

Mas has been covering up for the fact that he knows that another old Hiroshima acquaintance, Riki, has been masquerading all this time here in California as the dead Joji. He’s been trying to tell himself that this deceit is okay, really, even though his conscience has been telling him it’s not. Another reason for bachi. So, when outsiders come from Hiroshima looking for Joji, Mas realizes things are coming to a head for a day of reckoning.

When there’s a murder, and a young man whom Mas knows to be innocent is the main suspect, Mas knows that this time he can’t just walk away . . .

The plot of Summer of the Big Bachi has a sort of Chandleresque complexity, and it’s made even more twisted by the frequent flashbacks to Mas’s life in Hiroshima before, during and immediately after the bombing. I had no difficulty keeping everything straight, though, because Hirahara’s prose is beautifully limpid, evocative through its clarity. This also helped counterbalance the dialogue, a lot of which is in the dialect English of the southern California Japanese-American community. For the first few pages, I found the dialogue a little jarring for this reason; very soon, though, I was happily into the swing of it. (I have every reason to believe it’s authentic: Hirahara’s father was apparently a Japanese-American gardener, and she’s even written a relevant nonfiction book: Greenmakers = Gurīn Mēkāzu: Japanese American Gardeners in Southern California [2000].)

To my shame, I know almost nothing about the Japanese-American community, horticultural or otherwise, and this novel was a delightful introduction to it. Perhaps more importantly, the book brought home to me in a way I’d never appreciated before the true dreadfulness of the deed that was done that day in Hiroshima — it hit me so hard, in fact, that since finishing the novel yesterday I’ve dreamed about being in the city when the blast happened. (I almost never have dreams related to my reading — half a dozen times in my life would be an overgenerous estimate.) In other words, I found myself reading this as a first-rate, totally engaging mainstream novel and almost forgetting that it was also a mystery.

And still, now, when I think of the book I think of it as being a novel about Mas’s struggle to appease his fate and work through his bachi — rather in the same way that, when I think of Octavia E. Butler’s astonishing Kindred (1979), I don’t really think of it as a time-travel novel, although it is that too, but as a novel about the experience of slavery. Despite the fact that Mas consciously, if reluctantly, takes on the role of amateur PI, and despite my comparison above with Chandler, Summer of the Big Bachi doesn’t feel — at least to me — like a mystery novel.

Which is, in my opinion, all to the good. The distinctiveness of Hirahara’s voice is much to be commended.