A mysterious serial killer, nicknamed Dr. Rx because of the notes he leaves with his victims, is strangling criminals whom silver-tongued defense attorney Dudley Crispin (Hinds) has succeeded in getting acquitted. Crispin hires PI Jerry Church (Knowles) to protect his current client, manifestly guilty mobster Tony Zarini (Fain). However, Fain dies in the courtroom within moments of his acquittal, surrounded by friends and lawyers yet seemingly strangled like all the others.

Detective Captain Bill Hurd (MacDonald) of the NYPD is baffled by the case and wants Jerry to collaborate with the police investigation. Jerry’s brand-new wife, mystery writer Kit Logan Church (Gwynne), is less keen for him to continue, having visited the mother (Gordon) of the previous PI who tried to track Dr. Rx down, Barney Scott (uncredited); Barney was captured by Dr. Rx and subjected to an experience so terrifying his hair went white and he permanently lost his wits. 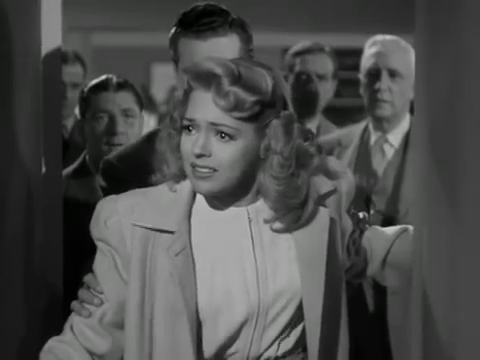 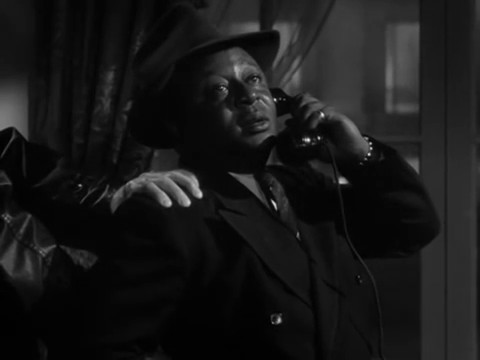 The obvious suspect, so far as we the audience are concerned, is a certain Dr. Fish (Atwill). Aside from the fact that he’s a medical man, he keeps turning up at convenient moments and seems clearly to be involved in the case.

There are other characters whose sole purpose in the plot seems to be to add to the suspects list. Mona Barrie and Paul Cavanagh play Crispin’s wife and brother, Eileen and John. William Gould plays District Attorney Nason; he’s mentioned as having as motive the desire to see wrongful acquittals amended. John Gallaudet plays mobster Ernie Paul, with Jan Wiley as his seductive moll, Lily.

Shemp Howard as Sweeney (left) and Edmund MacDonald as Hurd.

And there are the characters introduced for, gawdelpus, comic relief. Mantan Moreland plays Jerry’s hyperforgetful manservant Horatio B. FitzWashington, depicted as Stupid Because Black, in the despicable Hollywood tradition of the era; it’s an egregious waste of this actor’s prodigious comic talent. He shares one tediously long “bizness” routine with the other overt source of comedy in the movie, Shemp Howard as Bill’s knuckleheaded alcoholic sidekick, Detective Sergeant Sweeney. Howard’s time as one of the Three Stooges (which act he’d rejoin in 1946) is pretty strongly referenced here. I may have mentioned on this site before that I find the Three Stooges somewhat less hilarious than a bucket of cold sick, so I’m not the ideal audience for Howard’s scenes here.

Late in the proceedings what’s so far been a mystery thriller turns briefly into something akin to a Frankenstein movie as the masked villain threatens to surgically replace the captured Jerry’s brain for that of a gorilla. The set for this sequence features, aside from the obligatory gorilla (or, rather, the actor Ray Corrigan in a gorilla suit, actors presumably being cheaper than gorillas), arcing electrical apparatus of the kind that makes you anticipate a manic yell of “It’s ALIVE!”

So how does Jerry get out of this one? We don’t know. The movie boasts one of the most absurd wrapups I’ve ever come across in a mystery. Asked how the victims could have died by poisoning when all the evidence from their autopsies showed they’d been strangled, Jerry breezily dismisses the problem: “Well, it’s a poison from South Africa, and that’s the way it works.” Asked how he escaped from the gorilla and the villain’s operating theater, he simply tells his inquisitors that he doesn’t remember: one moment he was losing consciousness, the next he found himself wandering along the waterfront.

I thought I recognized Jan Wiley, who has just a bit part here, then remembered she starred as Eve in A Fig Leaf for Eve (1944), which I discussed on this site back in October 2016. Mary Gordon, who’s appeared on Noirish a couple of times, is something of a site favorite; she actually manages to bring some moments of gravitas to a movie that otherwise seems determined to be as empty-headed as possible. 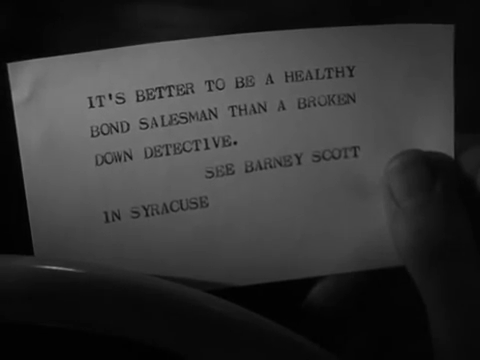