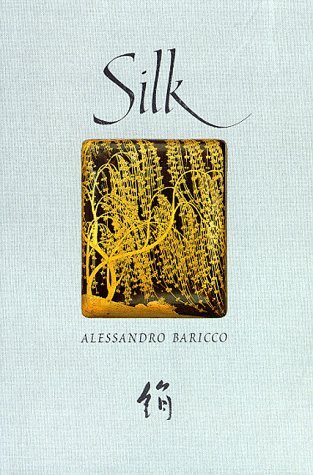 I picked up Silk for the least literary of reasons: the 1997 Harvill Press edition is just a beautiful little book, an object I greedily wanted to own. And, when I pulled it off the shelf to read a couple of days ago, I did so with little expectation beyond that it’d be a pleasant enough way to while away an hour or two.

Instead, I was absolutely mesmerized from the outset and held rapt throughout by a tale that’s both fascinating and moving — a tale that feels woven rather than merely told.

It’s the early 1860s and Europe’s silk farms are being devastated by a parasite. In one small town in southern France, the local silk entrepreneur insists that an emissary be sent to Japan to obtain fresh, disease-free silkworms from there. The trouble is that Japan has only very recently opened itself to the outside world, and at that only very partially so; in particular, the export of silkworms has been outlawed. Even so, the town’s silk merchants club together to send the young, recently married Hervé Joncour to Japan to see if he can smuggle them out some worms.

The journey’s long and arduous. Once there he finds a local ruler who’ll trade with him, but has the misfortune to fall in love with the ruler’s young concubine — and she with him — even though they cannot so much as speak to each other. During subsequent trading visits of his the relationship deepens, yet it can never progress beyond a matter of thoughts and glances.

For much of the time I was reading this novella I was enchanted by its sheer charm. It’s told in the simple, unadorned style of a fable, complete with repetitions and subtly altered near-repetitions (if you pay close attention you’ll learn several of the nicknames of Lake Baikal!), and this gives a touch of the otherworldly to the tale: even though there’s nothing supernatural in the events that are recounted, it feels as if something magical could break out at any turn.

And then, near to the end, the eroticism that’s been inherent throughout is suddenly made explicit — not through any physical act but through an expression of sensual yearning. This arrived as something so unexpected for me that it knocked me sideways and forced me to reappraise everything I’d read of the book to this point as a building-up to it. Thereafter, despite a revelation that again made me re-evaluate much that had gone before, the tale is a wistful winding down. It’s almost as if the novel has taken the form of an act of love.

Guido Waldman’s translation is superb, giving the text just the light, airy touch it should have.

This is a book I imagine I’ll be rereading more than once in the future. And to think I only bought it because it was so beautifully produced . . .