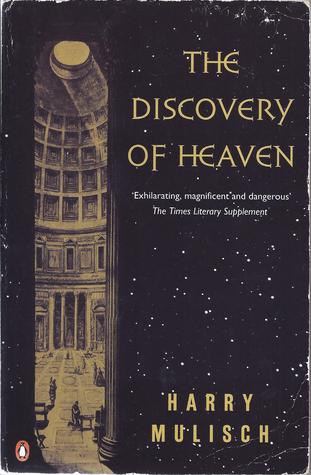 In a frame story that takes the form of a conversation between two angels (we assume), one of them recounts how he was under orders to recover the “testimony” (which we discover is the pair of stones upon which Moses wrote the Ten Commandments at God’s dictation). To this end, the angel tweaked events on earth to bring about the creation of a human emissary to perform said recovery. The novel is the history of how the angel achieved this, beginning a few months before the conception of the emissary, who’ll in the event be called Quinten, and finishing a little after the reclamation of the stones.

I was reminded a little, in terms of the novel’s overall construction, of Mervyn Peake’s Gormenghast trilogy, whose supposed protagonist, Titus, is still aged just two at the end of the first 500-page novel and who’s still just a youth by the end of the second. It’s only in the third, far shorter novel, Titus Alone (finished by Langdon Jones), that a late-adolescent Titus is old enough to do any of yer actual adventuring. In The Discovery of Heaven Quinten isn’t even born until halfway through; during the novel’s third book-length quarter he’s a child and it’s only in the final quarter that, as a late adolescent, he can go adventuring. Although the circumstances of the two works, Gormenghast and The Discovery of Heaven, are completely different, there are similarities of feel, too, as in the use of humor.

As I say, the tale starts months before Quinten’s conception, which takes place in 1967. We know his mother is an orchestral cellist called Ada; what remains in doubt is who his father is. This isn’t because Ada is promiscuous but because, through happenstance (in fact through the interference of our angel narrator), she could have been impregnated by either of two best friends, the dilettante linguist and politician Onno and the radio astronomer Max. It’s the friendship between Onno and Max that’s the dominant topic of the first three-quarters of the novel, even though the subject is “supposed to be” Quinten.

There are some beautifully shrewd bits of observation in the middle of all this, such as:

Meanwhile, in a paroxysm of colors, the sky was indulging in a sunset of a kind that in Europe could only be dreamed up by a crazed lighting technician, resulting in his immediate dismissal. [p149]

“So you think you can plumb the depths of the universe in this [dump].” He cupped a hand behind his ear and listened. “I can’t hear the echo of that Big Bang of yours at all. All I can hear are stupid cows in the distance, wanting milking.”

But there are also some pieces of insufferable pretension, places where we’re presumably supposed to gasp at the insight . . . except the insight is one of those that seem exceptionally profound when you should have left the pub before that extra pint, but rarely otherwise. Here, by way of brief example, is a philosophical reflection sparked off by the fact that our heroes are on a flight from Italy to Israel and realize there’s an hour’s time difference:

“That means that for that hour we haven’t existed. And if you’ve been able not to exist for an hour, no one can find you anymore, if you ask me.” [p678]

Unfortunately, this jejune pretentiousness is so infused through the text that it comes to characterize it. I’m perfectly okay with the fact that our various protagonists — primarily Max and Otto — can go off on sudden tangents and have sometimes long philosophical conversations that have nothing to do with the plot. I’m all for digressions in storytelling. Where I get antsy is when too many of these digressions strike me as being borderline piffle.

The digressions tend to be in the areas of architectural history (about which I know nothing), Biblical scholarship (about which I know very, very little — if you called it nothing I’d not be offended) and astronomy, mainly radio telescopy, about which I know something; in fact, I was studying astronomy at university in 1967, and can remember the changing astronomical “state of the art” through the years covered by the novel. But that shabby expertise of mine isn’t really needed to spot the most obvious of the errors in this field. There’s an explanation of how a linear array of radio dishes can be employed such that it’s the equivalent of one gigantic circular dish; alas, that explanation would be valid if the array were sited exactly at the north or south pole, but not elsewhere. And there’s constant reference to radio telescopes having mirrors, which of course they don’t. (Bending over backward to be charitable, this could be a translation error, if the Dutch use the same word for “mirror” and, say, “reflector.” Online English-Dutch dictionaries suggest not, but . . .) Oh, and the author seems not to know where erratic boulders, by definition, came from.

The point is not to show what a cleverclogs I am but this: If I’m spotting errors in the one field where I do know a little, how many errors are zinging straight past me in the (copious) areas of my ignorance? I remember reading many years ago a comment about Velikovsky’s “alternative prehistory” blockbuster Worlds in Collision to the effect that the archaeologists thought the archaeology was bunk but the astronomy seemed pretty convincing while the astronomers thought the astronomy was bunk but the archaeology seemed pretty convincing! Reading The Discovery of Heaven I felt I was facing the same dilemma. How much of the stuff about architectural history was bunk? — a matter of more than ancillary importance to the novel, because some of the architectural stuff serves as important plot underpinning.

And what about all those philosophical wranglings? As hinted above, I found far too many of them to be jejune, or pointless, or self-indulgent — the kind of profundity that one endures from one’s pre-adolescent children until one can endure it no longer.

Yet, for all of that, the novel does possess a certain fascination — at least, it did for me. Every time I felt like throwing it at the wall, and there’s quite a lot of it to throw, I found myself resuming my reading, driven on by . . . something. A couple of the characters seemed to me to be good company, especially Ada (although she effectively drops out of the story pretty early) and to a lesser extent Onno, who despite all his bombast seems a good egg who sometimes has interesting things to say. Every now and then, as noted, there was an insight that did seem to me to have value. And the fatalism resonated with me: Although we’re told that life-changing (and life-ending) plot events took place because of the intervention of the angel, it’s made perfectly clear to us that, to the participants in the tale, this circumstance is indistinguishable from mere random chance — which is to say that the “angel hypothesis” becomes unnecessary.

I could list other attributes of the novel that appealed to me, but I’m still not sure I’ve identified what it was that kept me reading, and to at least a moderate extent enjoying, The Discovery of Heaven.