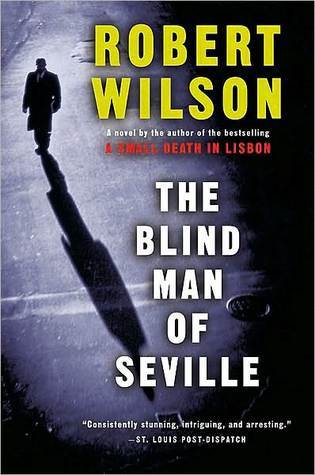 The Blind Man of Seville is a crime novel in that it’s a novel about crime. However, the crimes at its focus aren’t those described on the wrapper — a series of brutal murders in modern-day Seville — but those depicted in what seems initially to be the novel’s backstory. Again, although The Blind Man of Seville seems at the outset like a mystery/detective novel, taking the form of a police procedural, that isn’t really what it’s up to; in fact, the final resolution of the “mystery” strand of the tale, the revelation of the murderer’s identity, seems almost perfunctory in plotting terms (although not in the actual telling).

As you’ll have guessed, my views on this book are a bit mixed.

Inspector Jefe Javier Falcón is called in when a prominent if somewhat shady Seville restaurateur and businessman is found murdered, his eyelids cut off antemortem in a clear effort to force him to watch something he most violently didn’t want to see. Although Falcón is a cop of considerable experience, hardened by the many horrible experiences his job has entailed, this particular case knocks him sideways.

Falcón is the son of a celebrated artist, Francisco (or sometimes Fransisco) Falcón, who died a few years back, and the son still lives in the enormous family home, Francisco’s studio left locked and untouched as a sort of shrine to the father Javier loved. But now, on discovering that the murdered man and his widow, Consuelo Jiménez, were acquainted with his father, Falcón begins to read the extensive personal journals that Francisco left behind in a box in the studio. Slowly we and Falcón discover through the reading of the journals that Francisco, who seemed no worse than a sort of diamond in the rough, was in fact a monster, a man who killed readily not just during the Spanish Civil War and the Russian campaign of World War II but also afterwards, in peacetime. Falcón is, he realizes, not just connected to what becomes a series of modern-day murders; he’s slap-bang in the middle of the case.

At very nearly 450 close-packed pages, this is a long novel, and I confess it sure felt like it as I was reading it. Francisco’s journals take up far more of the novel’s wordage than you might expect, but by comparison with the rest of the text they’re far more tautly told, as befits what are, after all, supposed to be diary entries. Elsewhere, though, the writing is cumbersome to the point sometimes almost of self-parody. Every now and then there’s something rather wonderful in the prose, such as this:

Four o’clock brought him round into a permanent dark wakefulness [in which] the wooden beams in his vast house groaned like other less fortunate inmates in a distant part of the asylum. [pp106-107]

But such moments come at the expense of others:

. . . legs and buttocks raw from sitting in his uncontrollable urine. [p1]

He walked straight into Falcón’s eyes and caught the blue flash of his lover’s. [p52]

As he spoke his eyes darted about under cover of some heavy, dark eyebrows, which his wife was not keeping under control. [p90]

. . . he lowered himself into a chair in front of his doctor, hesitant as a man with elephant haemorrhoids that ran from nose to tail. [p177]

The sound of sizzling nylon reached him as she sawed her legs together. [p258]

He searched the inside of his head, reached for a cigarette, lit it and inhaled deeply. [p264]

One great oddity about the novel — and again a contributor to the prodigious length — is that for the first 150 or so pages, before we’re first introduced to those journals, the narrative is shaping up to be the police procedural we initially assumed it to be. The cops’ #1 suspect for the first murder — even though Falcón himself is convinced she’s not guilty — is the dead man’s widow, Consuelo Jiménez. There are all sorts of superficial reasons for suspecting her, including an extensive subplot about her somewhat checkered history before she met her much older husband. All standard police-procedural stuff. Yet this part of the tale, including an obvious if reluctant attraction that springs up between her and the recently divorced Falcón, is never resolved. Similarly left unresolved are various elements of the supplementary investigations that follow the further murders.

I’ve mentioned that the writing is cumbersome. After a while, I should add, this ponderousness begins to work to the narrative’s advantage: as with a slow-moving river coming closer to the sea, after a point the current becomes irresistible. I was definitely gripped by the book’s later stages, once the author had (it seemed to me) decided where he was going with all this, that what he wanted to create was a novel about dark revelation, about the impact of past events and the actions of the dead-and-gone upon the minds of people still living, rather than an investigation of murder. Perhaps Wilson was trying to convey that this is how real life works, that what we think is going to be one story often turns out to be another. But the effect in a novel is one of disjuncture, a sense that the two components don’t properly belong together.

Others have had different reactions to The Blind Man of Seville, mostly far more favorable than mine. It may be that I read this almost straight off the back of Iain Pears’s Stone’s Fall, another long novel that starts out as a mystery but then goes off in different directions, but one that worked for me far better. Read The Blind Man of Seville and judge for yourself.

A fearless faith in fiction — Various passions of the reading moment — Reviews based on purchased fiction books since 2008 — Elizabeth Bowen, Robert Aickman and many others — INFORMATION and NAVIGATION on this site’s front page — Let us now triangulate each book together!