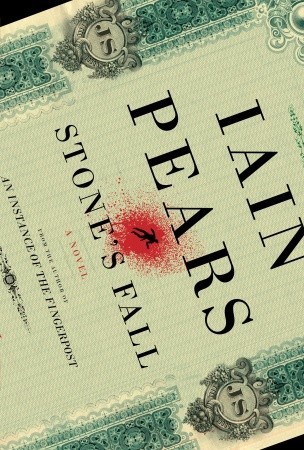 This is the fourth of Pears’s five (to date) standalone novels. I haven’t read the fifth, Arcadia; of the first four I’ve thoroughly enjoyed three (An Instance of the Fingerpost, The Dream of Scipio and now Stone’s Fall) while being far less entranced by the other ( The Portrait ).

What kicks off Stone’s Fall is the death in 1909 of arms trader and industrialist John Stone, a figure unknown to the public but a pillar of international finance. He died through falling from a high window in his London home. The authorities, who mysteriously delayed releasing the news of his death, believe it’s a matter of accident or suicide, but the rest of the world naturally suspects murder.

An additional suspicious circumstance is that there’s a clause in his will leaving a chunk of money to the love child no one ever knew he had; until that child is identified and located the estate cannot be settled. No wonder Stone’s far younger widow, Elizabeth, is keen for the child be found as quickly as possible; what’s odd, though, is that she should hire young crime reporter Matthew Braddock — at a more than handsome salary! — to do the requisite tracking down. Why not a professional detective?

Stone’s Fall, which is of epic length (far longer than the raw page-count might imply because the pages are quite tightly filled), takes the form of not one novel but three, each with a different narrator: a detective/mystery novel, set in 1909 and told by Braddock; an espionage novel, set in 1890 and told by Henry Cort, the (fictional) originator of the UK’s professional security services; and a Venice novel, complete with the requisite spooky occurrences, set in 1867 and told by Stone himself. The three are, as you’d expect, intimately entwined and do all serve the same story, which is the unraveling of why Stone plunged to his death; the reverse chronology is somewhat subverted by the fact that Stone is telling his tale shortly before his demise, so we’re being supplied also with some details from the “now” of 1909. Not until the final pages are we able to piece together the truth that seemed almost within reach in the opening chapters.

For the most part Pears’s telling of the tale is superbly measured, the prose having a lovely rolling, rhythmic, unhurried quality that seems to hark back to the nineteenth century or perhaps to the early, ambitious novels of someone like J.B. Priestley. Every once in a longish while, however, there suddenly appears in the midst of it all a sentence of such ugliness that you want to take it outside and drive a stake through its heart; I can’t guess why that was allowed to happen. There’s also quite a lot of sloppy proofreading. A couple of examples chosen at random from oodles of others:

And generally, when dealing with Barings [Bank], a refusal was generally taken to indicate a weakness of the bank which refused. [p333]

Overall, though, the novel’s a truly impressive achievement. There’s a lot to chew over here about human nature, including the tendency to reconcile the good we have inside us with the evil consequences of what we do, or with the evil we do in order to attain what we believe to be estimable consequences. It’s a book for the marathoner rather than the sprinter, and I can imagine some readers becoming impatient with it, but, for me, by the time I reached the end of it I was sufficiently in its thrall that I was wishing it could go on for a hundred or two hundred pages more.