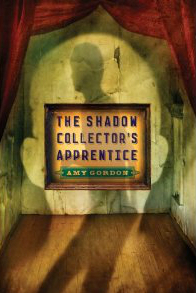 I came across this book in a catalogue when I was looking for B.A. Shapiro’s The Collector’s Apprentice. The blurb reminded me of F.E. Higgins’s The Black Book of Secrets, a novel that I adored a few years back. What larks, I thought: I’ll give this a try.

Well, this isn’t another The Black Book of Secrets — it lacks the sustained weirdness — but it’s interesting enough in its own right.

Young Cully Pennyacre, just turned 12, whose mother died years ago and whose dad has recently gone AWOL, gets a part-time vacation job in an antiques store, and soon discovers the owner is at the heart of a racket stealing people’s shadows for use as invisibility cloaks by the intelligence services. With the help of his pals and the three aunts who’ve been raising him, Cully thwarts the bad guys, makes new and unexpected friends, and gets his dad back.

I don’t usually, when reading a YA or (as in this instance) middle-grade novel, find myself wishing it had been written for grownups, but in the case of The Shadow Collector’s Apprentice I did. I loved the premise of the book, even though it has its precursors (remember Peter Pan becoming detached from his shadow), but felt that it warranted a, I dunno, denser treatment. I kept wondering what someone like Ray Bradbury might have done with all these elements — small town, shadow thieves, kids growing into their identities, dubious shenanigans, slightly eccentric aunts, a touch of romance. This isn’t to say that Amy Gordon should have written that other, hypothetical book — she’s a successful writer for this age group, and to judge by this novel deservedly so. It’s just that this particular reader would have been better suited by it.

The Shadow Collector’s Apprentice is certainly worth attention, because it does some interesting things with its premise, and I imagine readers in its target audience will love it — I know I would have at that age. But it made me yearn for something more.

2 thoughts on “book: The Shadow Collector’s Apprentice (2012) by Amy Gordon”