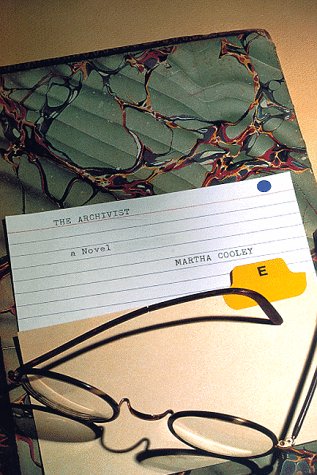 A novel that initially enthralled me through the beautiful clarity of its writing and then through the patterns of parallels in its network of a plot; even so, I was hardly prepared for the emotional devastation of its finale.

Matt, in his mid-60s, is a senior archivist in the library of an unnamed university. Among the sealed (“not to be opened until . . .”) archives he supervises, the pearl must be the collection of letters between poet T.S. Eliot and the love of his life, Emily Hale. One day a graduate student, Roberta, comes to ask Matt if she might view the Hale correspondence; naturally he refuses her, because the cache isn’t due to be opened for decades yet, but he’s nevertheless fascinated by her, even though she’s half his age, and the two begin a quirky friendship.

The root of his fascination is that Roberta strongly reminds him of his long-dead wife Judith, who spent the last years of her life in a mental asylum receiving futile treatment for her neuroses. As Matt, a T.S. Eliot aficionado, is all too well aware, there’s a strong parallel here with the situation of Eliot and his wife Vivienne, who likewise died in an institution. The parallel goes further. The two wives never stopped loving their husbands but, as they languished in confinement “for their own good,” they were treated by those husbands with shameful neglect.

Matt (named for Matthias, the replacement for Judas among the apostles) was a librarian and lukewarm Christian, Judith a poet who’d discovered her Jewishness relatively late in life. They married around the end of World War II, when America allowed itself to learn of the atrocities committed in Europe during the Nazi nightmare. Obsessed by those atrocities, Judith began making a collection of the tales of those who’d somehow survived them — in other words, the novel’s title, which seems to refer to Matt, could equally well be taken to refer to Judith.

It was the devastating confrontation with the evil enshrined in the horrific accounts collected in her archive that led to Judith’s breakdown; also, I think, the realization that the evil didn’t somehow magically end with the Armistice.

Matt is now by choice what we might call a solitudinarian. He’s rejected any depths he might once have had, content to live in shallowness, rarely allowing himself to become excited by the manuscripts in his care. And then the arrival of the earthy, argumentative, frank Roberta throws his orderly life into disarray.

The narrative’s divided into three almost exactly equal parts. The first and third are told to us by the present-day (1990s) Matt; the central section comprises entries from the journal Judith kept while in the sanitarium. Cooley does well in differentiating the two voices; even so, I had some little difficulty adapting back to Matt’s narration after a hundred pages in the presence of the far more volatile, far more impassioned Judith. That’s my only complaint about this novel, and it’s not so much a minor as a minuscule one.

As I said, the finale devastated me. I think perhaps the quietness — repression, almost — of Matt’s narration hid from me how very deeply involved I’d become in the characters and in what I might superficially call Judith’s dilemma: the powerlessness of the innocent to confront past mass evil. It was in the finale, even more than while reading her own extended account, that it came crashing down on me just how great was the horror she was having to deal with. Although their suffering was indisputably the greatest — we can hardly imagine how great — those who experienced the Holocaust directly were not its only victims.

Cooley, I see, hasn’t been prolific, which, to judge by this novel, is a pity. On the other hand, I’m not sure how often I could take body-blows like the one The Archivist delivered to me!