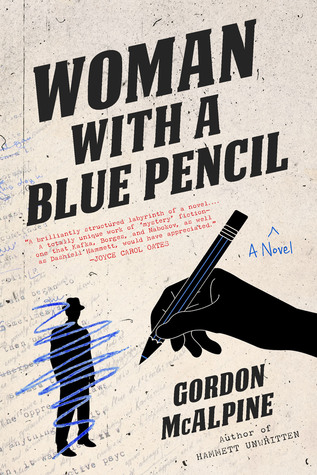 Japanese-American art prof and amateur PI Sam Sumida is watching the new movie called The Maltese Falcon at his local LA fleapit one night — the night before, although he doesn’t yet know this, the Pearl Harbor attack — when the film breaks. Moments later, when the image is restored, he’s watching a completely different movie: now it’s the Hepburn/Tracy comedy Woman of the Year.

And, as he discovers when he reels out into the night, two months or so have passed during the projectionist’s interruption of service. Japanese-Americans are now regularly beaten up by Good Ol’ Boy “patriots,” and will soon face relocation into internment camps. Worse still, he discovers there’s no evidence that until this moment he ever existed in this not-so-brave new world: he seems to have arrived in a lonely place, one that looks uncannily like his old haunt but is different in so many ways.

Worse still, this new world knows nothing of Sam’s loved if unfaithful wife Kyoko, whose eventually murder spurred him into ditching his academic post to embrace private detection.

What could possibly have happened?

What has happened is that Sam and Kyoko are fictional characters in the highly promising part-manuscript, The Revised, that a young Japanese-American author, Takumi Sato, has produced in the months before Pearl Harbor and sold to NY publisher Metropolitan Modern Mysteries, Inc. The publisher’s editor, Maxine Wakefield — the woman with the blue pencil — now, post-Pearl Harbor, wants to buy out of their contract because no red-blooded American is going to want to buy a novel with a Jap as protagonist.

On the other hand, Maxine reckons she’s discovered a great talent. If the author could only tweak things a bit . . .

So Woman with a Blue Pencil has three interwoven strands: the author’s original novel, as he continues to write it; the substitute, tweaked novel that he writes at his editor’s insistence, The Orchid and the Secret Agent, as by William Thorne; and extracts from the letters of “suggestions” that Maxine sends the author.

This sounds as if it could all be very confusing: A three-stranded narrative, Carruthers? What in the name of the good Lord can the Empire be coming to, eh? But in fact McAlpine handles it superbly and there’s no confusion at all.

What soon becomes evident is that the Sam Sumida manuscript is a wholly engrossing, sensitively written exemplar of the kind of 1940s mystery you wish you could find in a used bookstore somewhere and brag about all over the intertubes. Sam himself is a wonderful creation, someone with whom I found it immediately easy to identify. He can’t get away from the fact that he loves his murdered wife, even though she betrayed him.

By contrast, the novel that Maxine persuades the author to write, The Orchid and the Secret Agent, is the most dreadful 1940s pulp, full of racial stereotypes, jingoism, narcissistic portrayal of “homegrown” — i.e., white — Americans, and cliche. The embarrassing thing to admit is that I found the The Orchid and the Secret Agent strands highly readable too, as Korean-American superspy Jimmy Park takes on the infernal, Fu Manchu-like Japanese spy network that aims to overthrow US democracy.

The network is headed by a femme fatale called the Orchid. No prizes for guessing that, in Sam’s original timeline, the Orchid was Sam’s beloved wife Kyoko.

What becomes evident from Maxine’s letters and from the two narratives is that, while the whole time she thinks she’s making the novel better — not to mention improving its commercial prospects and turning its author into a Big Name of the Future — Maxine is in fact destroying it in every possible respect. Even when Takumi, by now incarcerated in a concentration camp, tries to introduce touches of realism about the experiences Americans of oriental extraction are facing in their post-Pearl Harbor nightmare, Maxine ruthlessly excises them with her famous blue pencil on the grounds that neither the censor nor the readership would tolerate the portrayal of WASPs as anything but, well, perfect Aryan gods.

In a last-page zinger we learn what Sato thinks of what’s now become in effect Maxine’s novel.

Obviously there are subtexts galore going on in Woman with a Blue Pencil, far more than I can sensibly outline here. Some concern the compromises publishing makes while all the while lauding itself for its virtue; some are clearly relevant to modern US self-deception about its success in consigning its racism to history’s dustbin. Even without those subtexts, though, this would still be a magnificent piece of work: it’s an enthralling meld of the parallel-world story with the PI/hardboiled genre with the kitsch spy thriller.

While reading it, I found myself often reminded of Anthony Horowitz, every other mystery reader’s fave du jour: he bends the mystery genre, discovers brilliant new ways of telling, that sort of thing. I’ve read and quite liked a couple of Horowitzes, but McAlpine manages to convey that same metafictional imaginative zing in about half the number of pages.