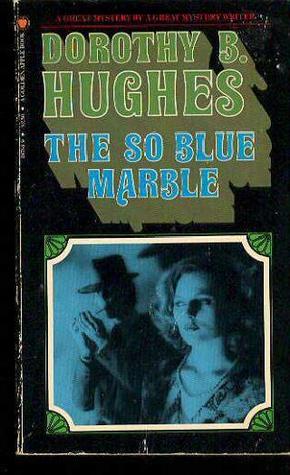 Dorothy B. Hughes is a name familiar to fans of film noir from the movies that were based on her novels: The FALLEN SPARROW (1943) dir Robert Fellows, with John Garfield and Maureen O’Hara as leads, RIDE THE PINK HORSE (1947) dir Robert Montgomery, with Montgomery and Wanda Hendrix as leads, and especially IN A LONELY PLACE (1950) dir Nick Ray, with Humphrey Bogart and Gloria Grahame as leads. All three are good movies, and I’d personally rank the last of them in my top five of the genre. (I haven’t seen the remake of Ride the Pink Horse, the TV movie The Hanged Man (1964) dir Don Siegel, but it’s on the to-be-watched list.)

The So Blue Marble was Hughes’s first novel and, although it’s often described as noirish or hardboiled, it truly isn’t. Instead it’s a gloriously entertaining romp with a plot that’s both ingenious and quite, quite loopy. Said plot is driven by a maguffin that’s about the most blatantly obvious since the Maltese Falcon.

Griselda Satterlee has been married and divorced, spent a while as a successful Hollywood star but packed that in to start a promising career as a fashion designer . . . and all this by the age of 24. She’s come to New York and is staying in the loaned apartment of her ex-husband, radio journalist Con, with whom she’s still on good terms and for whom she’s still secretly got the hots, even though she was the one who divorced him.

Going home late one night she’s accosted by a pair of twins, Danny and David Montefierrow, identical except for their hair color. Overtly psychopathic, they threaten her with pain and death unless she hands over to them the So Blue Marble, a fantastically valuable antiquity possessed of mystic powers. (It’s not capitalized in the novel, but I’m aiming for clarity here.) They’ve traced the marble as far as Con, and are certain Griselda knows where it is. And, as she soon discovers, they’re working in cahoots with her estranged, equally psychopathic kid sister, Missy. Griselda keeps telling this nightmare trio that she’s never heard of the So Blue Marble and so can’t help them, but of course they don’t believe her.

As I was reading, I kept finding myself reminded of Elisabeth Sanxay Holding, one of my favorite crime novelists of this era. (I’m in good company. Raymond Chandler said she was his favorite thriller writer.) Although Holding’s plots are generally very much more grounded than the one here — I haven’t really touched on the loopy bits in my description above — there’s something similar in the writing style and also in the presentation of female protagonists. Griselda is a woman who’s in many ways convinced she can’t really succeed without the assistance of a man, yet in fact she copes very well: all kinds of other people get knocked off by the ghastly Montefierrow twins, but Griselda thwarts them — even though, despite her protestations, she does know about the So Blue Marble, knows where Con has hidden it, and successfully re-hides it somewhere the Montefierrows will never be able to find it. As with Holding’s heroines, then, Griselda’s a more complex individual than she seems on the surface, and one with unsuspected strengths — like Lucia in Holding’s The Blank Wall (1947).

Griselda’s contrasted with her two sisters, the 16-year-old Missy, who seems already to have been living in sin with the twins for a couple of years, and the older Ann, who’s opted for the safe life, married to a bank manager who’s stultifyingly boring, mother of two kids she seems to not much care for except as necessary accoutrements, yet willing to entertain the prospect of a saucy weekend with one of the Montefierrow twins so long as hubby Arthur never finds out. Griselda describes both her sisters coolly, and yet we suspect that of the two of them she sneakily prefers Missy — until Missy starts sadistically offing people right and left, that is.

Hughes had an unusual writing style that takes a bit of getting used to, and here it’s the most pronounced in any of her novels that I’ve read so far: several times I had to pause to reparse a sentence. (Matters weren’t helped in a couple of instances by typos. I assume these have been corrected in the recent reissue of the novel.) As noted, the style’s a bit like Elisabeth Sanxay Holding’s, but it takes no prisoners in its unusual use of vocabulary — it’s not the vocabulary itself that’s unusual, just the way it’s deployed. I can imagine some readers being put off by this.

I found The So Blue Marble to be a wonderful entertainment, and I stayed awake far too late the other night finishing it. I’m surprised nobody’s filmed it: the twins are amazingly filmic monsters, and the plot — while it’d likely not appeal in Hollywood — should surely have attracted a moviemaker in Argentina or Italy or Japan.