The third Hollywood remake of a German movie, Geheimnis des Blauen Zimmers (1932), its two predecessors being Secret of the Blue Room (1933) and The Missing Guest (1938); I haven’t seen the latter.

This time the story—including its mystery elements—has been reworked quite extensively to make the movie something akin to a musical comedy.

The Three Jazzybelles: left to right, June Preisser as Jerry, Betty Kean as Betty, and Grace McDonald as Peggy.

The remake was initially meant as a Ritz Brothers vehicle, but fortunately that fell through. In their place we have The Three Jazzybelles (geddit?), a seemingly nonce team-up of Grace McDonald, Betty Kean and June Preisser. This trio offer enough fun and talent that I had a quick look around to see if there were perhaps more Three Jazzybelles movies. No such luck. 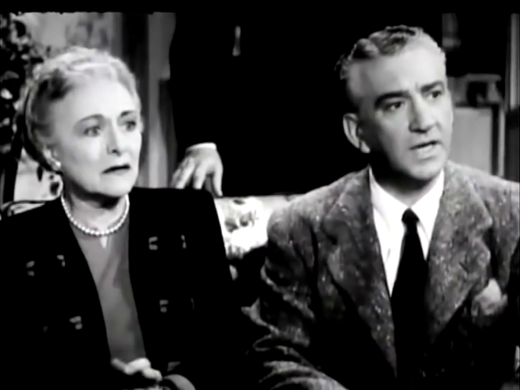 Nella Walker as Linda and John Litel as Frank.

It’s worth noting at the outset that, despite the order of the credits, the Jazzybelles are collectively the movie’s stars: they have the most screen time and they drive the plot, together taking the role so common in these old mysteries of the amateur sleuth who beats the cops to the solving of the crime. In this instance there’s another amateur sleuth who gets there even before the Jazzybelles do, but we don’t learn this until the start of the extended denouement.

Linda Baldrich (Walker) and her second husband Frank (Litel) are throwing a party to celebrate the reopening of the house in which, twenty years ago, Linda’s first husband, Sam Kirkland, died in mysterious circumstances. Since then the house—and especially its Blue Room, the scene of the death—has been locally regarded as haunted. Among the guests at the party are

You can get some idea of the Jazzybelles from their wisecracking dialogue, Betty being the wisecrackingest of the trio (to the point, perhaps, of oversassing the pudding a bit). Here’s an example:

Betty: “This house is haunted. I read about it in the Sunday magazine section.”
Jerry: “You did what?”
Betty: “Well . . . somebody read it to me.”

The official version of Sam Kirkland’s death in the Blue Room is that he committed suicide: after all, when the body was found, wasn’t it true the door was locked with the key on the inside? Linda, though, has always been certain he was murdered—murdered by someone who was attempting to blackmail him.

Bill Williams as Larry and Andrew Tombes as Dr. Carroll.

After all sorts of creepy incidents occur—a power failure, a piano that keeps playing even though there’s no pianist at the keyboard, etc.—Larry insists on sleeping in the Blue Room to put paid to the legends once and for all. But the next morning he’s found to have disappeared into thin air, the bed unslept-in and the door locked from the inside . . .

Ian Wolfe as Edward, the butler, who plays a far bigger part than you might expect.

The cops—Inspector McDonald (Toomey) and his sidekick Curtin (Marlowe)—insist the Jazzybelles remain in the house along with the other potential suspects. It’s because they’re worried about missing their big-break theatrical booking that the trio start detecting . . . with various degrees of enthusiasm:

Peggy: “Don’t tell me you’re afraid of a little trip to the cellar.”
Betty: “I don’t have ta tell ya. My knees are beating it out in Morse code.” 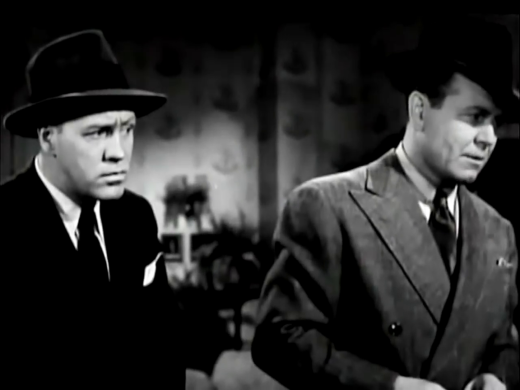 This old-fashioned haunted-room mystery (and also locked-room mystery, although the solution to that aspect is a complete copout) quite obviously isn’t noirish at all, except in the cinematography, which makes some striking use of shadows. It is, though, a great deal of fun thanks to its trio of stars, who sing, dance and banter with such irrepressible vivacity it’d take a harder heart than mine not to forgive them when the occasional joke misfires.

This was the first screen role of the noteworthy character actor Bill Williams; in this instance the former swimmer was billed as Bill MacWilliams. His real name was Hermann Katt. Among the rest of the support cast, Ian Wolfe gives splendid service as Edwards, the Baldriches’ butler and perfect “gentleman’s gentleman.”