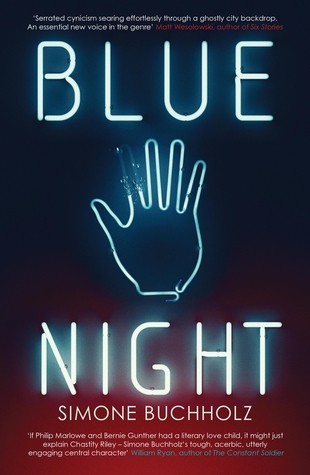 Chastity Riley is a public prosecutor in Hamburg, recently promoted sideways because she managed to put her boss behind bars and, while trying to shoot a bad guy in the leg, rather catastrophically (for him) missed by a few inches. Now she’s been put in charge of witness-protection issues in hopes this’ll keep her quiet for a bit.

Of course, it doesn’t. Even though the witness she’s assigned to protect, a man hospitalized after a vicious beating and the forced amputation of his right index finger, does his best to maintain silence and anonymity, she manages to learn enough from him to travel to Leipzig, where she gets the lowdown on a massive scheme to smuggle huge amounts of crystal meth and the even deadlier krok into Western Europe via Hamburg. At the same time, her old mentor, Georg Faller, has let slip his plans to single-handedly take down the viciously psychopathic mobster whose latest scheme the crystal meth operation is. More problematic still for Chas, her most intimate circle of friends, including her boyfriend, are not entirely uninvolved in the crimes that are going down . . .

While reading Blue Night (the title comes from the name of the pub Chas’s boyfriend runs) I was much confused in that it seemed to be set several books into a series — clearly, although there was enough background information given, I was supposed to already know some of the characters — and yet it was labeled as #1 in the cycle. I’ve since discovered that it’s in fact #6; however, it’s the first to be published in English translation, so presumably it’ll be followed by the others in the wrong order. Why do anglophone publishers do these things?

That aside, I enjoyed Blue Night a very great deal. Chastity Riley is a great character — her given name’s a bit of a misnomer — and the characters around her are superbly, if sparely, depicted as well: favorites are Faller, Chas’s best friend Carla, and the Leipzig cop Chas meets and enlists into her ad hoc task force, Wieczorkowski. The narration has the feel of the best of Golden Age pulp/hardboiled, and the story rattles along at a great lick: there’s never a dull moment. Rachel Ward’s flowing translation captures all the wit and verve that I assume were there in the original.

There’s also an unusual narrative device, one that I haven’t come across before (and may feel compelled to steal). At the end of each chapter there’s a series of short vignettes, ranging in length from a few words to a few paragraphs, written in the voices of different members of the cast and set before, during or after the main plot. These don’t seem especially germane to the events of that plot, and at first I was puzzled by them. After a few chapters, though, I found myself looking forward to them and the shafts of illumination they throw on the various characters — some of whom don’t even participate in the main narrative except offstage.

Fingers crossed Orenda Books hurry up and publish the rest of Simone Buchholz’s noirish Chas Riley series, because after this taster I’m thirsty for more. And fingers crossed, too, that they now start at #1 and work through in the correct sequence.