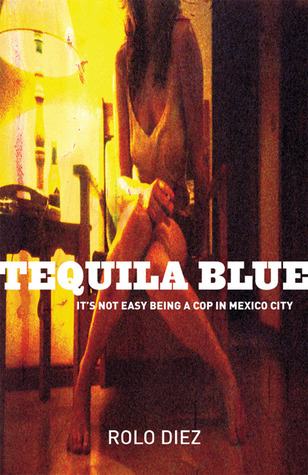 A truly savage satire of corruption in Mexican society but most especially among the Mexican police, Tequila Blue is strong meat that’s most definitely not for everyone.

Carlos Hernandez is a Mexican cop and therefore (according to the novel) a crook — he has to be in order to survive, because his paycheck is minuscule and arrives only intermittently. Besides, he has expensive habits: a wife and a mistress, to both of whom he’s extensively unfaithful with colleagues and whores (those hourly hotel bills do add up, you know), a fondness for hooch, and more. So he trades in illegal guns, steals valuables from the dead, and turns a blind eye to crimes if the price is right.

The trouble is, he’s one of the better, more principled cops. He’s a paragon of virtue alongside his boss . . .

In addition to its satirical thrust, Tequila Blue offers us a mystery. An American who does business in Mexico is found dead in a cheap hotel, the only clue being that he seems to have brought a transvestite hooker there with him. Soon, though, it’s revealed the gringo had a career in pornography and blackmail — and not just any pornography but snuff movies. The mystery is actually a pretty good one, although Carlos’s solution of it is not for the purist, relying little on logic and a great deal on imaginative guesswork.

And, even though he works out what went on, this is not the resolution of the case that can be presented in public — aside from anything else, the American embassy doesn’t want to see the truth about the victim’s profession emerge for fear of besmirching his home country’s public image. So Carlos has to invent another solution, one that’s more palatable to all concerned. Of course, that involves letting a serial burglar and rapist essentially walk free and the perpetrators of the worst crime in the novel go unpunished — a crime beside which mere murder pales. But those are small prices to pay for maintaining the status quo.

It’s not because of the viciousness of its satire or the unlikeability of its almost wholly amoral protagonist that I was a tad underimpressed by Tequila Blue. The problem with the book for me is that the plot seems to lose its way for quite a while in the middle. Part of this dreary stretch is a longish sequence that appears to make little sense (although it does help Carlos solve the murder); the Great Revelation of why it didn’t make much sense had me spitting and cursing at the deception’s cheesiness.

So, while I admired the novel’s ambition, I was less convinced by some of the execution. On the other hand, it’s a pretty short book, so there’s no huge investment of time involved if you think it might be worth a try.