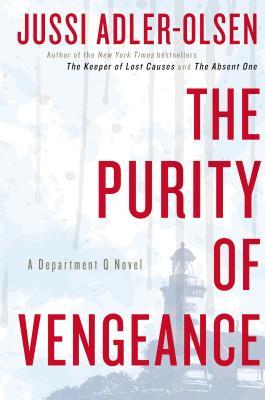 This is the third of Jussi Adler-Olsen’s Department Q novels that I’ve read — the others being The Keeper of Lost Causes and A Conspiracy of Faith — and I feel that I’ve developed a sort of love-hate relationship with them: on the one hand, they’re extremely readable (and here, obviously, a great deal of credit must go to translator Martin Aitken), yet I find the adolescent, lavatorial humor wearisome, the central characters cartoonish and not really believable, and the plots contrived.

The Purity of Vengeance offers no exception to this general pattern, and so probably represents my farewell to Adler-Olsen’s work. Except I think that’s what I said the last time.

Nete Hermansen’s early life was destroyed by the people around her, from the cousin who got her pregnant at age 15 before disclaiming all culpability to the doctor who raped her before sterilizing her without her consent. In 1987, therefore, Nete decided to take revenge. By now a very wealthy widow, she devised a plan to lure the seven most guilty surviving individuals to her apartment and murder them. The only person who failed to respond to her invitation was the doctor, Curt Wad.

Flash forward to the present (2010), and Curt Wad is now head of a nasty far-right “patriotic” party whose activities, thanks to the many medical professionals among its ranks, include a secret eugenics-based policy whereby “undesirables” like Nete are sterilized. Detective Carl Morck’s cold-case squad at Department Q discover there’s a link between Wad’s present-day activities and the mysterious disappearance of several people all on the same day in Copenhagen back in 1987 . . .

It’s not just as far back as the 1980s that the story goes, because really its origins lie in the 1950s, when the pseudoscience of eugenics was shamefully quite prevalent in the Scandinavian countries and countless sterilizations of “undesirables” were a consequence. It’s easy to forget, too, now that the Scandinavian nations have become something of a symbol of the success of tolerant, liberal, nurturing societies, that it wasn’t so very long ago they suffered as much as anyone from closed-mindedness and hypocritical “morality” — and how easy it could be for them to revert.

This historical aspect, with its underlying theme of the ability of petty power to corrupt as absolutely as the absolute form, is what gives The Purity of Vengeance its greatest strength, I think. Alas, for me its greatest weakness comes when it’s dealing with the doings of the personnel of Department Q. Matters weren’t helped for me when I spotted the final, supposedly gobsmacking twist coming a mile off.

I know the series has countless devoted fans and that in my iffiness towards it I’m swimming against the stream. But it was somewhat devastating to come to the end of the novel and realize how much more I’d have enjoyed it if the central series characters hadn’t been there. The backstory: great. Nete’s scheme and her putting of it into effect: great. The modern-day machinations of the despicable Wad and his ghastly cronies: great. But Carl Morck, his caricatured laziness and his ever so hilarious encounters with diarrhea: not so much.