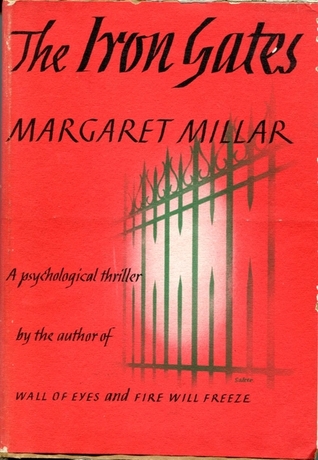 Sixteen years ago, Mildred Morrow set out late at night to walk home across a lonely park from the house of the neighbor, Lucille, with whom she’d spent the evening.

But she never got there. The next morning she was found dead in the park, her skull stoved in by a mighty ax blow. And, thanks to a lackadaisical police investigation, her murderer was never caught.

Today Lucille, now the second wife of Mildred’s widower Andrew Morrow, suddenly departs her home in mysterious circumstances. Inspector Sands of the Toronto PD, who remembers Mildred’s case well even though he was at the time just a humble patrolman, is called in to investigate. He finds a household riven with divisions: Andrew, an amiable gynaecologist; Andrew’s spinster sister Edith; and Andrew’s adult spoilt-brat kids, Martin and Polly, neither of whom has ever taken to their stepmother — indeed, Polly has always forthrightly detested her. Sands’s investigation also very soon finds Lucille herself, unable or unwilling to explain her flight but clearly stark terrified.

Her terror remains even after she’s been confined behind the iron gates of an uppercrust psychiatric hospital. And she’s right to be scared, because there are more deaths to come . . .

This was the third and last of Millar’s series of novels featuring Inspector Sands (her sixth novel overall), and like its predecessor, Wall of Eyes, which I read a few days ago, it’s really an out-and-out psychological thriller rather than a mystery — although it certainly functions well as a mystery novel, with a multiple murderer for Sands to ensnare and apprehend as he solves crimes both ancient and modern. (I read both novels as part of the fairly recently published five-novel omnibus The First Detectives, the opening volume of a hugely ambitious project from Soho Press, reprinting the entirety of Millar’s work in a matching set of six omnibuses and a memoir.) And, like Wall of Eyes, it’s an absolute humdinger, although I was enmeshed by this one a tad less quickly and completely — I think because the later novel lacks any figure as intriguing as Wall of Eyes‘s enigmatic Alice Heath.

As noted, this was just Millar’s sixth novel, and yet she’s already showing a maturity of voice and an auctorial authority over her material and narrative that most crime writers would I think gladly kill for. The Morrows aren’t the most appealing of individuals; our sympathies are far greater for a couple of the peripheral characters — Giles, who’s Polly’s fiance, and Janet, businesswoman sister of one of the victims — than they are for Andrew, Edith, Polly, Martin or even Lucille. But that’s by design: Millar has clearly discovered by this relatively early stage in her career that the doings of unappetizing characters are just as interesting as those of their more immediately attractive counterparts, and perhaps even more so.

Having read five Millars in the past month I’m obviously going to take a break. But I have others of her books lying around the house, so I’m sure several further Millar novels are going to feature in my reading for 2019. I had forgotten how very good she was.