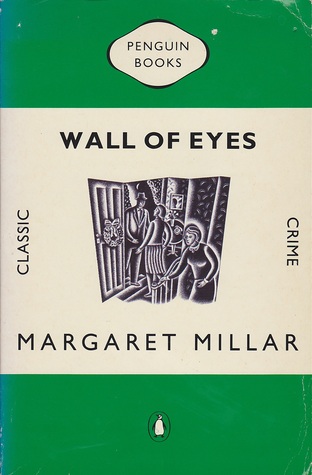 Golly. Where to begin?

I read this novel as #4 in the fairly recently published five-novel omnibus The First Detectives, the opening volume of a hugely ambitious project from Soho Press, reprinting the entirety of Millar’s work in a matching set of six omnibuses and a memoir. (The print’s kind of small and I could have done with fewer typos, but it’s a handsome volume nonetheless.) I’d intended to read the fifth novel next, but Wall of Eyes is such an intense piece that, on finishing it, I felt I had to turn to lighter fare for a couple of days.

All of which is to say that Wall of Eyes is very, very good.

Two years ago Kelsey Heath was blinded in a car accident where she was the driver. The passengers were her fiance, Philip, her brother, Johnny — both of whom escaped with only minor injuries — and a girlfriend of Johnny’s, Geraldine, who died. Since then Kelsey, heiress to the family fortune, has been playing the blindness card for all it is worth, keeping the rest of the family — and Philip — firmly under her thumb. The only person willing to do anything about Kelsey’s tyranny is her elder sister, Alice, who recognizes that Kelsey needs help.

Kelsey nearly succeeds in committing suicide by poison. Released from the hospital to recover at home, she’s stabbed to death in the night. Was it one of the family? Or did an intruder take advantage of a door that had been inadvertently left unlocked?

The solution to the mystery is an absolute humdinger, a bolt from the blue, but the odd thing is that by the time I got there it seemed only the icing on the novel’s cake, so deeply had I become involved in the lives of the Heath family and those linked to them, most notably the denizens of Joey’s, a semi-seedy niterie among whose performers Johnny found Geraldine and has more recently found a new girlfriend, Marcie.

Millar displays in this novel a mastery of character-driven suspense that reminded me of Elisabeth Sanxay Holding at her very peak, as did the writing style. I really cared about some of the characters and the fates that’d befall them, especially the repressed Alice and the Joey’s MC, Stevie Jordan, to the point that I was loth to reach the end of the book. And Millar plays a very clever trick here: the one character to whom she doesn’t seem to devote great attention is her series detective, Inspector Sands. Rather than deploy the usual practice of GAD novelists, where the quirks of the detective — Poirot, Campion, Wimsey, Alleyn, not to mention Millar’s own earlier Paul Prye — are a major contributor to the proceedings, Millar quite deliberately leaves Sands as something of a tabula rasa, letting the other characters and the tale itself occupy center stage, so to speak. The more I think about this ruse of hers, the more I admire it: Sands has to be there, make no mistake, because you need someone to do the detecting and drive certain aspects of the plot, but he doesn’t need to be the focus of our attention and in fact it allows the novel to develop far greater depth if he’s not.

I can see that the coming year’s reading is going to feature a fair amount of Millar. This one is just so splendid.