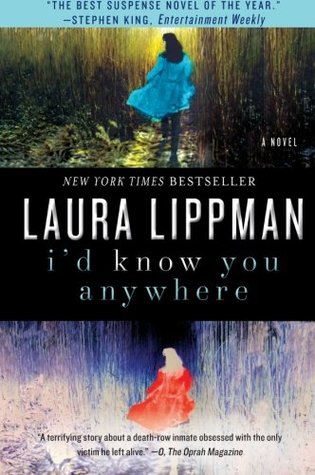 I’ve been pretty lucky with my reading during 2018, taking things overall, so it’s a surprise that, halfway through December, I’ve encountered what may be my book of the year. I’m normally unhappy with genre pigeonholing except as a guiltily deployed shorthand, and all the while I was reading I’d Know You Anywhere it was borne in on me exactly why. This is a crime novel, yes, in that it’s a novel that has unspeakable crimes at its core; if you had to pigeonhole it more precisely you’d probably call it a psychological thriller. But what it is, first and foremost, is an extraordinarily powerful study of a human being who could have been broken by a horrific childhood experience but who refuses to let that nightmare define her.

Fifteen-year-old Elizabeth Lerner was abducted by Walter Bowman, a serial killer of teenage girls, and kept by him as he traveled around for over a month before he was captured by the cops; during that period he murdered another girl, Holly, and raped Elizabeth.

Twenty years later, Elizabeth has become the married Eliza Benedict, comfortably placed suburban mother of two. Then, out of the blue, a letter arrives from the accursed Walter. All his appeals have run their course, and he’s due to face the death chamber in a few weeks’ time. Could he be in contact with her, preferably meet her in person at the prison, just to set the record straight between them before he goes to meet his maker?

Eliza is tempted to accede to the request, and slowly succumbs to that temptation. She’s always been puzzled as to why she should have been the one whose life was spared by this serial slayer. There are even some — like Holly’s parents and the scuzzy hack journalist who wrote the book about the case — who suggest Elizabeth was in some way complicit in Walter’s latter crimes: that she wasn’t so much his victim as his accomplice. And there are times when Eliza herself, staring into the abyss, wonders if there could be some truth in the accusation.

For the first part of the book we alternate between present-day Eliza amid her family — coping with petty domestic crises, juggling soccer-mom commitments while trying to process the implications of Walter’s bolt-from-the-blue communication — and twenty-years-ago Elizabeth, living in terror of her captor, bent by that terror to his will, living under his threat that, should she try to escape, he’ll kill not just her but her parents and sister. In the latter half the narrative opens out far more, bringing in other players, like Walter’s misguided facilitator and the mother of the murdered Holly, still (justifiably) embittered after all these years. And some of those petty domestic crises — those involving Eliza’s bratty teenage daughter Iso — are beginning to seem not so petty.

I became completely involved in Eliza’s life and her problems. identifying wholly with her (so far as an elderly geezer can identify with a youngish suburban mom) as she confronted each new moral dilemma. In some ways she seems passive, letting circumstances — and the stronger-minded people around her — shove her this way and that, but it’s not hard to sense that she has her sticking points, her inner reserves of resolve. It would be easy to pity her, but pity isn’t what she wants. What she wants is the ultimate victory over her decades-ago persecutor: to refuse to let her life be defined by what he did to her, to drown his monstrousness in her own normality. Her vengeance is going to be that she lives well.

Lippman being such a fearsomely intelligent writer, there are of course all sorts of undercurrents in the novel. Leaving aside the particulars of Walter and Eliza for a moment to deal in generalities, is normality really our best means of dealing with monsters? And then there’s the matter of the death penalty: if, like Eliza and most of those around her, we believe it’s grotesquely immoral for countries to be in the business of killing their own citizens — that murder doesn’t stop being murder just because it’s sanctioned by the state — how do we approach the specific case in which Eliza may or may not have some fleeting control over the fate of Walter?

As I implied at the outset, I’d Know You Anywhere is a mainstream novel that happens to have crime at its heart. I found it a compulsive page-turner, initially because of my concerns for Eliza’s fate and the fate of her family, and then because of the building suspense as the book began to rush toward its climax. That suspense is based not so much on physical events — there’s no direct physical threat to Eliza and her family, although sometimes we worry that there could be — as on psychological dangers. Can she ward off Walter’s final, desperate yet confident attempt to control her? Can she attain the victory over him that she seeks?

Oddly enough, one of the other outstanding books I’ve encountered this year is Lippman’s Sunburn, which I read back in August. I’d know You Anywhere surpasses that one, I think, if only through its — attained — ambition. But they’re both superb pieces of work. Lippman is, on this evidence, among our finest current novelists.