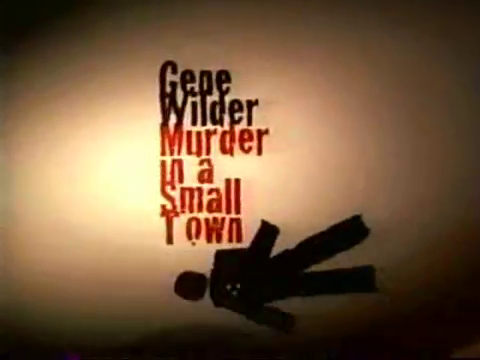 It’s 1938 in Stanford, Connecticut, and the new movie you’ve just got to see is ANGELS WITH DIRTY FACES (1938) dir Michael Curtiz, and starring James Cagney, Humphrey Bogart, Pat O’Brien, Ann Sheridan and the Dead End Kids. (We see a brief clip from this movie.)

Until nine years ago, when his wife was murdered in NYC, Lawrence Carter (Wilder) was a hugely successful Broadway producer—hence his nickname of “Cash”; now he’s living in relative seclusion as director of the Stanford Repertory Theater. When a rich, antisemitic, homophobic local businessman, Sidney Lassiter (O’Quinn), is gunned down one night, no one sheds too many tears. As the victim’s unloved, unrespected wife Martha (Conroy) coldly remarks, everyone had good reason to want her late husband dead.

That includes Lassiter’s secretary Kate Faxon (O’Connell) (with whom he long ago had a bastard he tries to forget), his legitimate son Albert (Edison), and of course Martha herself.

Cash’s cop friend Lt. Tony Rossini (Starr) asks for his help on the case: Tony’s good at detecting, his reasoning goes, but Cash, because of his directorial background, is better at reading people. And, of course, that’s what counts in the end . . .

This A&E original movie was successful enough in the ratings that a series was planned, the “Gene Wilder Mysteries,” but in the end only one sequel appeared, The Lady in Question (1999 TVM), which aired almost a year later; it too was directed by Joyce Chopra and written by Gilbert Pearlman and Wilder himself, with Starr and Jones reprising their roles. What caused the premature ending of the series seems to have been Wilder’s struggles with cancer, and indeed he looks underweight and from time to time almost frail during Murder in a Small Town.

What I enjoyed about the movie was primarily the 1930s mise-en-scène, with enough hints gently dropped into proceedings to keep us aware that, yes, this was the 1930s, when attitudes were different. I also liked some of the performances, notably those of Wilder, Starr, Conroy and Moss-Bachrach, with Terri Hawkes and Ben Bass good too in their small roles as second-string stage actors Maggie/Esther and Michael. However, the plotting seemed a little half-hearted and the narrative a little undisciplined—for example, while I could happily watch Elisabeth Rosen for hours on end, I still haven’t quite worked out why her character needed to be included in the movie at all.

All in all, a pleasant enough way to pass ninety minutes and of most decided interest as a curio, especially if you’re a Gene Wilder fan, but by no means a must-watch.