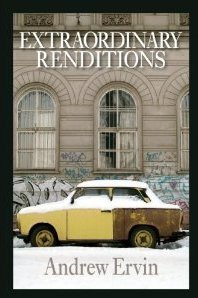 A mosaic novel comprising three loosely linked novellas, the first and the last centered on the performance of a new opera in Budapest and the central — and longest — being one of the best pieces of noir fiction I’ve read in a while. In that central novella the sense of the novel’s title is as in the delightful US practice of exporting torture to black sites; in the other two the “extraordinary renditions” are of pieces of music.

After decades of self-imposed exile, Harkalyi, a world-famous Hungarian composer who fled Europe on being liberated from a Nazi concentration camp, has returned to his native land for the grand premiere of his new opera. He finds a nation in turmoil, with bands of skinheads roaming the streets and beating up people whose color or lifestyle offends them. He also discovers that his niece, Magda, has a liaison function in one of the local US Army black sites — which, so far as Harkalyi is concerned, means that the wheel is turning full circle, from one concentration camp to another.

This opening tale is desperately flawed (or, at least, it is in the ARC I read) by a bizarre use of tenses: essentially, the word “will” keeps getting used where the construction demands “would” or “was going to.” It made my teeth grate every time. Since this oddity didn’t occur in the other two novellas (except in a couple of instances in the third), it stuck me that perhaps it was an intentional echoing of Hungarian grammar. Since I know so very little about Magyar (this is a euphemism for “zero”), that wild guess of mine may well be baloney. If it’s correct, though, then obviously this is a fiendishly clever lit’rary device, dash it, and not at all just plain fucking irritating, which was what I found it to be.

The central novella follows the fate of Brutus, a black soldier on the base who’s subject to racism not just from the locals but from his fellow-soldiers; to add to his “sins” as a black man, he’s highly intelligent and extremely literate. His only consolation is that one of the civilians on the base, Magda — yes, Harkalyi’s niece — has entered into a secretive but passionate affair with him. And then a superior officer blackmails him into carrying to a pub in Budapest a cache of arms destined for IRA terrorists. Brutus knows that, whether or not he delivers the consignment, his number is basically up.

Brutus is a tremendous character, and I’d have happily spent far more time in his company. Here’s one of his observations during his long, despairing flight across the city:

Upon closer inspection, Budapest wasn’t all that different from Philly. . . . The only real difference was that everyone was white. It was like being at the opera.

The third novella focuses on Melanie, another superbly drawn character, a US expat who’s one of the second violins in the grandly titled but in truth rather second-rate orchestra that’s going to premiere Harkalyi’s opera. Despite her lowly status within the orchestra, the score calls for her to deliver the work’s concluding, definitive statement . . .

As will be obvious, the central novella is only tenuously linked to those that sandwich it: it’s not at all important to the tale that Magda is Brutus’s mistress or that (as we’ve already learned in the first piece) Harkalyi briefly encounters Brutus. There are, though, thematic links that bind the trio more firmly together — not just that all three protagonists are US expats (despite Harkalyi’s accident of birth) but that they’re observing a recrudescent Hungary that’s destroying itself through permitting fascism and its incestuous bedmate, racism, to flourish, ignoring the country’s own relatively recent history in a pretense that this evil pair of isms don’t devastate everything they touch. Of course, since Ervin wrote his novel things have gotten even worse there, the “nationalists” having succeeding in electing one of their own as the nation’s leader.

Although I had difficulty with the tenses in the first novella, as noted, it still struck me as a damn’ fine piece — just a damn’ fine piece crying out for some copyediting. The other two segments of Extraordinary Renditions, particularly the gripping central section, more than made up for the problems I’d had with the first. I’m very glad I persisted.