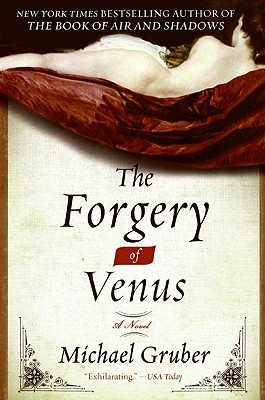 A fascinating tale of art, artistry, art forgery, time travel and what literary critic John Clute dubbed godgaming: the gaslighting, for reasons nefarious or otherwise, of someone so that they come to believe in a completely false reality.

Chaz Wilmot Jr, living in the shadow of the memory of his father, an artist in the Norman Rockwell mold, is himself a relatively successful commercial artist who’s constantly trying to hide it from himself that, just like his celebrated father, he could have been so much more of an artist than his own timidity has allowed him to be. To increase the pressure on him, his son by his second failed marriage has a mystery ailment that may kill him young unless he has the kind of medical treatment that only multimillionaires can afford.

When a medical researcher offers Chaz a place on an experimental program to test a new drug that will supposedly boost imaginative creativity, he jumps at the chance. But the drug does more than enhance creativity. It also — as per the drug in Daphne du Maurier’s The House on the Strand — seems to give him the power to travel into other lives and alternate versions of his own life. In particular, he finds himself drawn into the existence of Diego Velázquez, the great 17th-century Spanish painter. On occasion he recovers consciousness after one of his transtemporal journeys to find that in his absence, so to speak, he has been painting in the style of Velázquez.

But there’s a drawback to forging artworks for gangsters. They reckon the one thing that could go wrong with their fraudulent schemes is if the forger himself blabs, and there’s an obvious way of making sure this doesn’t happen . . .

It’s difficult to know quite where to start in describing why I enjoyed this book so much. So far as I can tell (I was married for twenty years to a fine artist), the artistic insider-talk is authentic, complete with lots of very funny, very snide remarks about New York’s Whitney Museum and the stuff it chooses to hang. (For some reason MoMA escapes similar mockery.) I know far less about the art-forgery world, for obvious reasons — the closest I’ve ever come to it is never quite getting round to reading Tom Keating’s autobiography — but in this respect, too, the details seem authentic.

The book’s stuffed with nice artistic insights. Here, for example, is part of Chaz’s commentary on why a particular life-sized portrait Velázquez did is so affecting:

But [the portrait’s] power comes from a lot more than scale, because a life-size Kodachrome print would be a joke. It’s not mere illusion, has nothing to do with those fussy little nature mort or trompe l’oeil paintings you see in the side rooms of museums, it’s its own thing, the life of two men, artist and subject interpenetrated, coming alive, the vital loom of a life in a moment of time . . .

On reading that observation, that what’s important about a portrait is not just the painter, not just the subject, but the intersection of their two lives, I sat back in my chair, and said, “Yes!” before continuing to read. And there are countless little observations like this. For the time I was reading this novel I felt I was learning to think how a fine artist can think.

Aside from a short framing section front and back, the novel’s narrative is supposedly a transcription of Chaz’s own account of events as dictated by him onto a compact disk. As such, it mimics spoken monologue, with lots of sequential commas everywhere and the like. It took me a little while to get used to this but, once I did, it seemed completely natural, the “spoken” flow of the words drawing me in in a way that a more formally correct text might not have done — so much so that, when I got to the book’s last few pages and the concluding little section by Chaz’s friend, the more written style seemed almost anticlimactic. I felt rather like Chaz’s friend did when he wrote, as the book’s final few lines:

[I] stood for a moment in front of the greatest painting in the world, The Maids of Honor by Velázquez, and thought about what it would be like to be him, really be him, and I couldn’t deal with it, and I left and reentered the long, gray sanity of my life.

The wrapup near the end of the book, where most of what has gone before is rationalized, struck me as a tad hasty, and I can imagine this section would strike some readers as being clodhoppingly Dan Brownish. As for me, though, it made me grin. For much of the book Gruber has been pretending to spin a Dan Brownish tale while mischievously addressing quite different concerns, and now here he comes right out into the open in a sort of take-it-or-leave-it moment before returning to what he’s really interested in.

The Forgery of Venus represented, for me, an absolutely addictive experience — far more gripping than the average thriller or adventure yarn. It surely has launched Gruber into the forefront of my consciousness as a writer to watch.