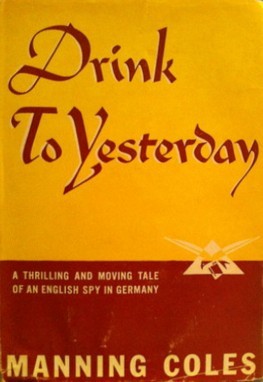 A while after we’d first moved into our current house, about twenty years ago, we discovered that what we’d assumed to be a bit of solid wall in the living room was a much-painted-over built-in storage chest, so to speak. Once we got the thing open it proved to be full of books, jammed in there willy-nilly years and more likely decades earlier. We knew that an older generation of the previous owners had been readers; to judge by the inscriptions in the books, these had been their light reading, thrust into the “wall” either for storage or, to judge by the way they’d been stuffed in, for insulation purposes. The mice had been at many of them, but a fair few were still in readable condition; some of these we gave to the local thrift shop and some I salvaged for myself, intending to read them in the near future.

Which is how I came to own a copy of Manning Coles’s Drink to Yesterday. The near future proved to be not as near as I’d anticipated.

The novel was intended, according to the cover blurb, as a debunking of the Bulldog Drummond-style glamorized espionage story that was apparently then (1940) popular:

He carried the tray into his sitting room and read, while he was eating, a book the doctor had lent him called Bulldog Drummond. How delightfully easy the career of an Intelligence agent would be if only life were a little more like that! One went about upon entirely unlawful occasions armed with automatics and never, never met a policeman at the wrong moment. [page 259]

In Drink to Yesterday we have by contrast what seems like a fictionalized autobiographical piece, which is what it may very well in effect be: Cyril Coles, one half of “Manning Coles” (the other was Adelaide Manning), had served in British Intelligence.

At the outset of World War One, young Michael Kingston is desperate to enlist, but is too young. At length he lies about his name and age, becoming “Bill Saunders,” and does some time in the trenches. However, the fact that he speaks fluent German singles him out as a potential recruit for the espionage people, and in due course he finds himself shipped across to Cologne as Dirk Brandt, a Boer who’s arrived to help his Onkle Hendrik run the latter’s import/export business.

In fact, as “Dirk” discovers, “Onkle Hendrik” is in real life his old schoolmaster Tommy Hambledon, the guy who got him interested in learning modern languages in the first place. (Hambledon, a rather Albert Campionesque figure, is missing presumed dead by the end of the novel; however, I see there are Tommy Hambledon books after this one, so I guess the news of his demise has been greatly exaggerated.)

“Dirk” and “Hendrik” engage in various acts of sabotage, espionage and murder. In a typical adventure, they kill an elderly scientist whom they suspect is behind a German effort to spread cholera on the British mainland, only to discover later that he was innocent — had in fact forcefully refused to take part in the enterprise.

This theme — that the two spies’ actions are as like as not to prove fruitless or misdirected — runs through the book and is a part of what gives it its quasi-autobiographical power. On the other hand, it can be frustrating, too, that so often strands of plot just meander off into nothingness rather than being neatly tied off. While reading Drink to Yesterday I was several times reminded of Eric Ambler’s novel Cause for Alarm (1938), which appeared a couple of years earlier and has something of the same “memoir” feel to it; but Ambler was a better writer, and managed better to observe the conventions of the novel at the same time as creating the sense of authenticity.

Another disadvantage of basing fiction on autobiography is that some of the events that may well have been hilarious in real life seem pretty strained when presented on the page — the pub raconteur’s “You’d have died laughing if you’d been there” syndrome, with a vengeance. For example, there’s a whole flipping chapter about the time when — wheeze! chortle! — “Dirk” for no apparent reason goes off on a drunken bender in Cologne and its environs, all the while having to keep reminding himself not to forget the name that he’s just discovered of a Canadian saboteur. This chapter may have started off as a rattling good yarn to entertain while passing the port; as a chapter of an espionage novel, though, it seems stretched and artificial.

There are some signs of the novel’s age. The writing (like Ambler’s) seems relatively undated in style, but every now and then I was brought up short. On page 112, for example, we learn that bacteria are actually fungi, which I suppose (I haven’t checked) must have been respectable current theory in 1940 (or maybe even in 1917). This led to a glorious moment a couple of pages later:

“. . . It’s odd, isn’t it, to think of the germs of tuberculosis, of smallpox and of cholera as being vegetables? But they are.”

Drink to Yesterday, published in 1940, must have been written in the early months of World War Two, perhaps even before the outbreak of hostilities. One odd thing I found while reading the novel was that I had to keep reminding myself that it was Kaiserian Germans “Dirk” and “Hendrik” were dealing with and mixing among, not Nazis. The German Intelligence officer von Bodenheim, for example, has the same sort of zealotry, expressed in much the same way, as you’d expect to find associated with a Gestapo officer in a tale of the later war.

On page 58 we learn that a particular espionage activity was “interesting but rather dull,” and I was tempted to apply the description to Drink to Yesterday as a whole. But that’d be unfair to the novel, because it isn’t dull (although it has a couple of dullish sections, like the “drunken bender” chapter I mentioned). It clearly occupies a place of some significance in the history of the espionage novel, and would be well worth reading for that reason alone. And it’s certainly entertaining even if, neglecting the rigors of plotting, it fails to deliver the sort of punch you’d expect.

I might even have been tempted to read the sequels . . . but presumably the mice got ’em.