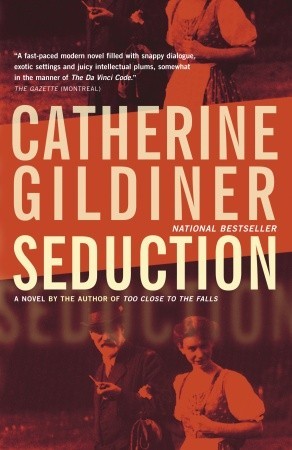 A novel that’s marked by a number of very visible failings but that I nonetheless enjoyed a very great deal.

It’s the very early 1980s. Kate Fitzgerald, having served nine years to date for murdering her husband, is granted a TA (temporary absence) by the prison psychiatrist, Dr. Garbonne, on condition she work on behalf of a major international Freudian society to investigate the behavior of its high-profile playboy chairman, Anders Konzak, who’s threatening to reveal bombshell information that would destroy Freud’s reputation, and the school of psychoanalysis as a whole. Since Kate has spent her years in solitary confinement studying Freud and Darwin, she’d seem ideally qualified for the job . . . except that Garbonne insists she work with an ex-con PI, Jack Lawton, and teamwork has never been Kate’s forte.

Soon there’s a murder, and Kate is the obvious suspect. Then there’s another: likewise. She’s convinced this is all part of some elaborate plan to pin the crimes on her, since it’d be easy enough to slam her back into the slammer and throw away the key. (“Slam her back into the slammer.” I’ve picked up the habit from reading the book. Gildiner uses this form of quasi-repetition a lot as a literary device. Most of the time I wallowed happily in it; occasionally it irritated me.) She doesn’t know if she can trust Jackie Lawton — perhaps he’s part of the plot? She knows for certain, after nine years of being fruitlessly analyzed by him in the Big House, that she can’t trust Garbonne.

Prickly, paranoid, highly intelligent, at a guess borderline autistic, Kate is a hard person for the world to like, although some have no difficulties. For example, she gets on like a house on fire with Anna Freud, Sigmund’s youngest daughter, who nursed her father through his final years, now nurses his reputation and legacy, and herself did hugely important, groundbreaking work, especially in the field of child psychiatry. (By the time of her death in 1982 she was being tipped as a possible Nobel laureate.) Others to whom Kate warms and who warm to Kate are Bozo, a maverick, wildly eccentric Freudian researcher whose ideas Konzak has been plagiarizing, and Shawna, Bozo’s flaky, hash-brownie-guzzling, jewelry-artist housemate.

You have here all the ingredients for an intellectual murder mystery rooted in scientific history, but I’m reluctant to offer that as a description for Seduction. (The title refers to Freud’s abandoned seduction theory, whereby he postulated that female hysteria was a product of women having been seduced incestuously in childhood by their fathers.) Yes, there’s a murder mystery — and one with a very unexpected, thoroughly satisfying solution — but it seems to me Gildiner is merely using this as a framework upon which to hang lots of fun speculation about what might really have gone on during the early years of psychoanalysis, whatever the orthodox history books now say. She offers us a very plausible alternative suggestion as to the identity of the celebrated psychoanalytical subject Anna O., generally supposed to have been the social pioneer Bertha Pappenheim. And, most fascinating of all at least so far as this reader’s concerned, she offers us an alternative explanation of the origins of psychoanalysis itself, both the theory as a whole and most of its intellectual pillars. Throw in lots of other merry speculations about the history of this particular science (or, really, as it’s now generally acknowledged, pseudoscience) and . . . yes, it’s pretty obvious why this novel appealed so much to me.

(The comparison, in a couple of review extracts cited on the cover, to Dan Brown’s oeuvre is just plain daft. Gildiner should sue. If you wanted to compare it to another novel, you could try John Darnton’s excellent — and excellently odd — The Darwin Conspiracy from the same year, 2005.)

Yet, as noted, Seduction has some pretty obvious flaws. There are various anachronisms, the most obvious being the use of a cellphone in 1982. Clearly someone pointed out this particular howler to Gildiner because there’s the most abjectly hamfisted attempt to pass it off as not really a howler at all, with Kate complaining bitterly that she has to use an extra-large purse to carry the thing, etc. In fact, the first publicly available cellphone didn’t become available until the following year, 1983; I encountered a prototype around that time or perhaps even into the tail end of 1982, but Kate would have been more right than she knew to complain about the cumbersomeness: the thing was about two-thirds the size of a car battery and of comparable, albeit somewhat lesser, weight. It also didn’t come fitted with an autodialer (which Kate wonders if she’ll “remember” how to use). I’m not sure why Gildiner didn’t simply write the cellphone out of the plot; it’d not have been hard.

I spotted several further anachronisms; I’m sure there were others I didn’t catch.

I’ve mentioned (parenthetically above) the habit of repeating words for effect, not always pleasingly. There’s also an odd and disorienting use of tenses, with most of the text being written as per standard in the past tense but, every now and then, a sentence or two in present tense. I came to the conclusion those sentences were intended as Kate’s thoughts, perhaps initially designed to be set in italics. But in a couple of cases that explanation didn’t seem to work. Whatever the truth, those intertensual lurchings surely disrupted the flow of my reading.

Did I mention the truly dimwitted passage on page 328 where Kate tries to equate Freud’s psychoanalysis with Darwin’s theory of evolution by natural selection? Kate’s argument borrows from the playbook of creationists like Ken Ham: you weren’t there millions of years ago to see what things were like, evolution isn’t experimentally falsifiable, and it and psychoanalysis are both “still theories” . . . revealing, it’d seem, that Gildiner, despite being a practicing psychiatrist, doesn’t know what a scientific theory is.

There are also odd changes of tone. Again, I rather liked these, but they did weaken the integrity of the novel as a whole. For example, while most of the novel is told fairly straight — although leavened with Kate’s excellent one-liners and snarky observations — the section involving Bozo and Shawna, during which Kate unwittingly consumes some of the latter’s hash brownies, opts instead for a sort of happy, surreality-tinged wackiness, as if someone had stuck a bit of John Philip Sousa into the middle of a Beethoven symphony.

Suspicion is a novel for which the word “quirky” could have been invented: it’s a one-of-a-kind. I found it thoroughly engrossing and a very rewarding read. Alas, it seems to be Gildiner’s sole foray into fiction.