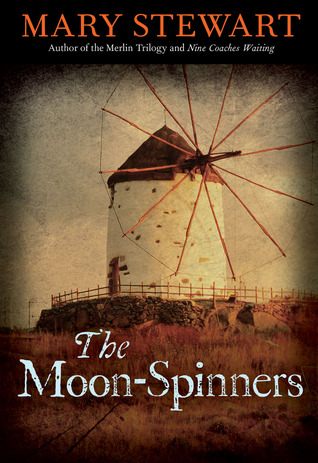 I read a few of Mary Stewart’s romantic suspensers back in the day (for some reason I was less entranced by her Arthurian series), but I’m pretty sure this wasn’t one of them. I did watch the 1964 movie, although all I can now remember of it is the windmill and (of course) Our ‘Ayley. When I saw a copy of the 1963 US edition of the novel (I think it’s a bookclub reprint) at a library sale recently I couldn’t resist grabbing it for nostalgic reasons.

And, golly, am I glad I did so! There’s nothing like a good adventure tale well told. Stewart picked me up on page 1 and the next thing I knew (though ephemera like eating, sleeping, cooking and working broke my concentration from time to time) I was coming to the book’s end, gasping.

Young, liberated Nicola Ferris, a junior employee at the British Embassy in Athens, goes for an Easter holiday to a remote Cretan village and finds herself in the midst of a murderous intrigue. Thanks to her courage, fortitude and gumption, she saves the bacon of a couple of young English tourists who themselves stumbled upon a murder, then succeeds in engineering the capture of a formidable crook. In the process she falls precipitately in love, but I think we can forgive her that.

The book’s not perfect: my Goodreads five-star rating is based on sheer enjoyment rather than outright merit (for which it deserves four stars, plus or minus). There’s a whopper of a coincidence near the end that beggars belief, however much it might help resolve a plot-strand; walking in moonlight, a character manages to see traces of blood between the stones of the path beneath him; we’re told something’s like a vulture homing in on its kill when, of course, the whole point of vultures is that they home in on other people’s kills; and so on. But there are glaring faults in Casablanca, too, and they’ve never much affected my estimation of that movie or disrupted my pleasure in watching it.

And now, natch, I want to read/reread me some more of Stewart’s thrillers. But I have really a stonking amount else to read, you might object. True, but by today’s standards her novels are fairly short. Even so . . .

Note for purists: The cover image isn’t from the 1963 edition I own. It’s that of the 2011 reissue by Chicago Review Press. If seized by the urge to buy the book yourself, you could do worse than buy that edition. Chicago Review Press is a great publisher, a bastion against the corporates, and deserves support.