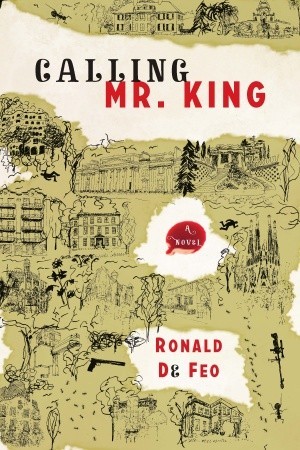 You’ve all read the novel or seen the movie about the hitman who has a midlife crisis and wants to pack the job in and retire, only he knows that in his chosen profession the only retirement plan is the permanent one — right?

Well, this is that novel, again. Or, more accurately, it’s not. That’s the premise it starts off with, but author Ronald De Feo, formerly a senior editor at ARTNews Magazine and MOMA employee, takes the basic premise and does something a bit different with it: he makes out of it a novel about architectural history. I’m not sure the experiment actually works, but I certainly respect him for trying it and by and large I enjoyed the outcome.

Our unnamed hitman — his bosses call him “Mr. King” when they contact him about each new job — is regarded as a man at the top of his game: fearless and absolutely reliable. Yet recently his mind has taken an introspective turn. He’s hesitant about a job in Paris, although he gets it right in the end. He bungles a job in Derbyshire, UK. Worse still, he develops an interest in domestic architecture — especially the Georgian home. He also decides that he’s becoming an intellectual, someone who reads books — and not just for the pictures. And he realizes that, though he comes from upper New York State, he’s really an Englishman at heart . . . and a minor aristocrat at that.

After the Derbyshire kerfuffle, his bosses “advise” him to go and lie low in New York for a few weeks or months — to take a holiday. There, as mild-mannered English toff Peter Chilton, he longs for London while studying English art and architecture and ruminating on the hellish circumstances of his upbringing — and even meets a girl:

I was happily reading and chewing when I looked up some time later and noticed a pair of solid, shapely legs just one booth up and across from me. The legs were exposed all the way up to the thighs, where blue denim shorts suddenly covered the flesh. I tried not to be obvious but I kept straying from the top of a page to the bottom of this woman.

The relationship goes nowhere, but it’s part of a humanizing process that’s alarmingly alien to him.

As you’ll have guessed from that extract, the text is often slyly humorous, sometimes because “King” himself is witty in his thoughts and sometimes at his expense. As his intellectual pretensions increase, so do his pseudery, his faux-English uppercrust accent and his snobbery. We’re encouraged to laugh both with him and at him. Here he is reacting as a buffoonish boss intrudes into a territory that “King” has come to regard as his own exclusive territory: philosophical reflection.

“. . . Then again, if only Parker had been shot they might not have figured it for a hit at all. They might’ve taken it for an accident. After all, people go hunting in the country. There’s not much else to do. Hunting is a little like going crazy, when you think of it. I mean, even killing people makes more sense — they’ve crossed you, gotten in your way, challenged you. But shooting up a bunch of rabbits or birds that have nothing to do with you or your business and aren’t even much good to eat — that’s perverted, if you ask me. Anyway, people might have thought that Parker had been shot by some stupid cockeyed hunter — the fool fires at a bird or rabbit, but he drops Parker instead. It’s possible.”

So is life after death, I thought wearily.

Despite that, the book’s surprisingly readable. We’re pulled along by the promise of the next witticism.

In the novel’s closing line “King” reveals his true name, John Cole. I’m not sure if his final identification of a name represents his at last becoming an individual human being in his own eyes or if the name itself carries some significance (beyond the obvious pun) that I thickly haven’t spotted. A conundrum.

I suppose you could read Calling Mr. King as in part a homage to hardboiled fiction, or even to Hemingway, but with Free Added Lyricism. Whatever the case, it’s a bit of a mixed bag of a book, a worthy experiment, an oddball. I rather liked it.