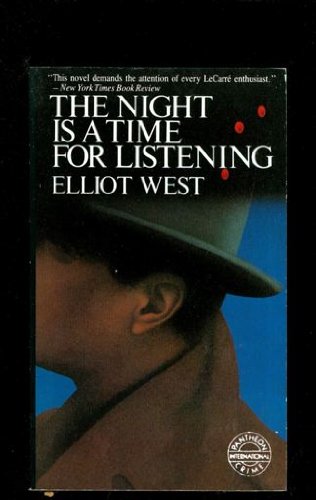 West Berlin, not so long after the cessation of World War Two’s hostilities. US journalist Marco “Darsoss” Darsossakis is here because the one thing that keeps him living from day to day is the prospect of murdering Otto Vorst, the Nazi officer who gleefully waterboarded Darsoss’s beloved wife Anne to death. At last Darsoss has tracked down Vorst to the city, only to learn that the man has been safely secreted by the Russians far behind their own lines. If Darsoss is to have any chance of getting his hands on Vorst, he’s going to have to do a deal with the Russian security service, the MGB. Meeting him clandestinely, the MGB’s officers tell him they’re amenable to the idea, so long as Darsoss is willing to do them a “small service.”

So over to London Darsoss goes, to be introduced to the circle of Soviet-sympathizing ex-Los Alamos nuclear physicist Ian Quennel. Quennel has the secrets of the A-bomb and Darsoss has a perfect memory, so the idea is that Darsoss memorize the details Quennel gives him and then travel as a sort of human data-transmission device back to Berlin, where he can recite the information to the Russians. As part of Darsoss’s cover, he and Quennel’s beautiful wife Disa must pretend to be initiating an affair . . . and you can predict what the complication is going to be there!

At first all goes well, but then two untimely deaths throw the scheme into disarray. Besides, Darsoss, who ever since Anne’s death has been capable of feeling nothing beyond misanthropy and the thirst for revenge, begins to feel revulsion for the notion of betraying the West . . .

A couple of the blurbs at the back of this book[*] compare West’s previous novel, Man Running, to the work of Geoffrey Household and Graham Greene. Although I haven’t read Man Running, I can see the parallel between the relevant fictions of those two writers (and of Eric Ambler) and West’s The Night is a Time for Listening. I was reminded even more of Upton Sinclair’s Lanny Budd novels, a couple of which I read many moons ago. West’s work is certainly in the same envelope, so to speak.

That’s not to say the resemblance, beyond category, is especially strong, nor that West’s work is as good. He has a very odd (for today) writing style, which is embellished to the point of artificiality, and yet at the same time rather labored and flat. This meant I found it rather hard work to immerse myself fully in the tale; I knew that the paranoid, claustrophobic atmosphere was there, because that’s what all the words added up to, but I had great difficulty feeling myself to be in the middle of it. Even so, the book did begin slowly to exert a hold on me, so that I was gripped by it even at the same time that it wasn’t stirring my blood.

If that makes sense. As you’ll have guessed, I’m having a little difficulty order and evaluating my reactions to The Night is a Time for Listening. They’re a mixed bag. I think I ended up liking the book a fair amount, though I guess I won’t know about that for sure until a week or two has passed. (I certainly respected it, but that’s a separate issue.)

In the meantime I’ll be keeping my eyes open for any others of West’s novels I might trip across — they seem all to be out of print, so it may be a while. (Besides, it seems he wrote only a handful.) I’d like to try to settle in my mind if he’s an unjustly forgotten star of espionage fiction or just another writer cashing in on the 1960s spy-fic boom.

[*] I was reading the hardcover, not the paperback edition whose cover is shown above. My copy has lost its cover, and I couldn’t easily find a decent image other than this one. (Thanks, FantasticFiction.com!)