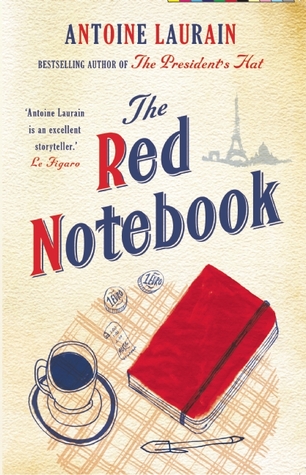 It’s not often that I agree with anything the Daily Torygraph says, but the quote from that newspaper’s review on the front cover of The Red Notebook more or less says it all: “A gem.”[*] I couldn’t help thinking, as I read this short novel, that this is what I’d hoped Nina George’s The Little Paris Bookshop would be like.

Late one night in Paris, craft gilder Laure Valadier is mugged as she returns to her apartment, and her chic handbag (purse) is stolen. The next day divorced local bookseller Laurent Letellier discovers the bag and, planning to return it to its rightful owner, rummages through the contents. But the credit cards are gone along with the cash, of course, and so is anything else that might reveal the identity of the bag’s owner.

What he does find, among much clutter, are her key ring (which will prove crucial to the search in a delightfully clever way, although he doesn’t yet know it), a paperback signed “To Laure” by the author, and her commonplace book — the red notebook of the title (although Laurent’s bookstore is also called The Red Notebook — Le Cahier Rouge — so the title’s doing double duty). Reading somewhat guiltily through the notebook, Laurent realizes he’s beginning to fall in love with the mystery woman — or at least with his conception of her. But how can he find her with such a paucity of clues?

Laurent’s task is actually trickier than he knows, because right now Laure’s lying in the hospital in a coma . . .

That’s the premise. The tale takes quite a few twists and turns, with the later stages of the story cleverly mirroring the earlier plot, and it’s told throughout with a lot of wit and tenderness, not to mention some punnery that made me grin (for example, the name of gilder Laure could be heard as “l’or“; and, while there really is a skincare product called Pschitt Magique . . .). Laurent’s teenage daughter Chloe, although her role is relatively small, is a superb creation, as is Laure’s gay friend and fellow-gilder William.

The translation by Emily Boyce (with Jane Aitken) is by and large very good, although I do wish publisher Gallic Books, whose list I love, would employ more careful proofreaders. One proofing oddity is that on several occasions you find what was obviously meant to be a single sentence arbitrarily split into two. For example:

That afternoon, ten years ago, when she had not responded to him asking if she was there, as he was doing now. He had gone round opening doors and found every room empty until he reached the kitchen. [page 81]

And then there are occasional little howlers, like the “thirty-three-inch records” which Laurent finds among Laure’s music collection.

Nitpicks aside, this is a novel with charm and wry humor galore — not to mention bookish references everywhere — and I think it’d take a far harder heart than mine not to be sucked into the lives of its very real, very human characters.

[*] I agreed with the Daily Mail quote on the cover too — “Soaked in Parisian atmosphere, this lovely, clever, funny novel will have you rushing to the Eurostar post-haste” — at the same time as I laughed aloud at the irony. The Eurostar is the train that links France and the UK via the Channel Tunnel. The Mail was at the forefront of the campaign that has led to the imminent disaster of Brexit, which inter alia will make travel by Eurostar significantly more arduous.