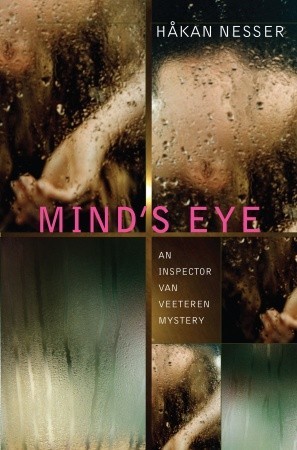 Schoolteacher Janek Mitter wakes up one morning to a crushing hangover, the realization that he’s suffering a memory blackout, and the discovery that his wife of just three months, Eva, has been drowned in the bathtub behind a bolted door. There’s no evidence that anyone else but the two of them was in the apartment the previous night, and so Janek, still with that gaping hole in his memory, is arrested, tried and convicted, even though he’s certain he couldn’t have killed his beloved Eva.

But grumpy, misanthropic Chief Inspector Van Veeteren — he’s depressed not that his wife has left him but that she’s thinking of coming back — isn’t certain the cops got the right man, and so, despite the reluctance of those around him, insists his team keep the case open even after Janek has been sent off to begin his sentence in a mental hospital. And, of course, circumstances prove Van Veeteren right . . .

Mind’s Eye is my introduction to Nesser’s work, and I found myself reading it as quickly and with as much enjoyment as something by Ed McBain in his prime. Don’t let me mislead you — they’re two very different authors — but, on the evidence of this novel, Nesser shares with McBain the ability to create an enormously readable police procedural that’s quite brutal in places and yet full of a surprising amount of very effective humor, usually based on observations of his characters’ quirks.

I have exactly one beef with the novel: the business of the bolted bathroom door is never explained. I could see how there might be some sort of symbolism going on — locking away the memories of a relationship with Eva, perhaps? — but really I’m still mystified by this aspect of the plot.

Aside from that cavil, though, all the rest of my feelings about Mind’s Eye can be summed up in a single word: Wow! The book gripped me from the start, and I had genuine difficulty putting it down when things like deadlines and sleep demanded I do so.