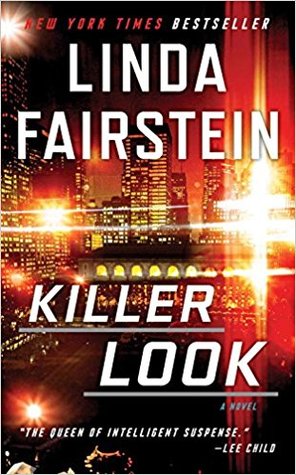 I read one of the earlier books in this long-running series many years ago and, although I remember nothing else about it, I do recall enjoying it. So when Killer Look came my way I thought it’d be fun to check in on Fairstein’s series character, independently wealthy New York Assistant DA and sex-crimes expert Amanda “Coop” Cooper, to see how she and her pals were getting along. I don’t know if I was unlucky in my choice of book or if I simply wasn’t in the right frame of mind for Fairstein and Coop, but I had great difficulty becoming involved in this.

Coop was abducted and terrorized in the previous volume, so now she’s on leave while she tries to get her PTSD — and her habit of self-medicating with Dewars — under control. Even so, through cop boyfriend Mike Chapman, she becomes embroiled in investigating murder and shenanigans in the New York haute couture biz.

Although, despite the best efforts of my Better Half, I’m not exactly a walking clothes horse myself (thank heaven for thrift shops and rummage sales, say I), I thought the background sounded potentially interesting; plus, who cares what the background is when the story’s in the hands of a master storyteller?

Where I hadn’t expected to have difficulties was with the characters. Oh, to be sure, I’d anticipated that some of the fashionistas might be the kind of loathsome divas it’s fun to chuckle about, or even to abhor. If that anticipation had been satisfied I might have enjoyed the novel more. Instead I found myself just sort of resentfully disliking practically everyone in the book — and, alarmingly, this included both Amanda Cooper and her heartthrob Mike Chapman. Just about the only characters I warmed to at all were an ambitious hotel maid (in a tiny role) and someone who turned out, through what seemed somewhat dubious plotting — as if this twist had been thought of rather late in the proceedings — to be one of the bad guys. Had the mystery itself been a bit more engrossing I might have been able to ignore my dislike of the characters, but it never caught my imagination and the truth, when finally revealed, didn’t come as much of a surprise.

As I say, if I’d picked this up on a different day or in a different week, I might now be writing a glowing report of it. As it is, though, Killer Look just didn’t grab me. But don’t take that to mean I’ve abandoned Fairstein: as Jim Steinman almost sang, one out of two ain’t bad.