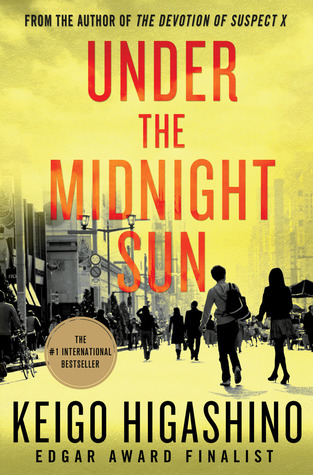 In Osaka in the early 1970s, a pawnbroker is found savagely murdered in an abandoned building. The crime fascinates Detective Sasagaki, but when, over the next year, the two major suspects die — one in a traffic accident, the other in what everyone thinks is suicide although murder and misadventure are both possibilities too — the investigation is wound down. Still, Sasagaki can’t get the case out of his mind. He’s haunted by his recollections of the two children involved: Ryo, son of the murdered pawnbroker, and Yukiho, daughter of the woman who may or may not have committed suicide and may or may not have been the pawnbroker’s mistress.*

For the most part episodically, Under the Midnight Sun (I much prefer the UK title, Journey under the Midnight Sun) follows the fates of those around Yukiho and Ryo as the two lead their ostensibly separate lives during the next twenty years or so. Sasagaki makes occasional appearances on the periphery; we’re aware that he hasn’t abandoned the investigation, but that’s about it. Instead the focus is on the stories of a sea of secondary characters, some involved with Yukiho and/or Ryo in the short term, some whose lives touch those of the enigmatic pair over many years.

This episodic structure means that, for about the first two-thirds of the novel, each new chapter has the feel of a separate albeit sequentially linked tale. Only in the last few chapters does everything coalesce to form a single narrative, with Sasagaki, and his investigation of the by now decades old mystery, returning to center stage.

This description might make the novel sound unduly cluttered, but I found the constant changes of perspective, and the jumps forward in time, invigorating: it all made for compulsive reading. Yes, from time to time I could certainly have done with an old-fashioned Dramatis Personae list to help me keep track of the characters (Yukiho, Yaeko and Yuko, for example, may all seem distinctive names to a Japanese reader, like Jeffrey, Jill and Jack do to an English one, but for simple-brained moi . . .), yet such concerns slowed my progress hardly at all.

Adding to the interest for me was the way that each new episode of the narrative brought with it cultural changes, sometimes in terms of books or movies or trending pop music but often relating to progress in information technology, particularly computers. We go from data cassettes (remember those?) through 5¼in floppy disks (remember those?) to hacking, a near-incomprehensible concept to most of the characters even as some are familiar with the new world IT is opening up.

This is a fairly long book, yet I found myself reading it very quickly, racing through the pages as I became involved in all the characters’ lives. As I read I found myself thinking that in an odd way this was a suitable companion piece to another long novel I enjoyed recently, Carlos Ruiz Zafon’s The Labyrinth of the Spirits: both have the same sprawl of characters and the same temporal scope, although in this latter respect Zafon’s structure is far less linear. And both novels can be quite ruthless toward those characters: just because the author has persuaded you to invest your emotion in someone doesn’t necessarily mean that particular individual is going to make it to the finish line. A difference is that Zafon’s characters tend to be either good or evil; Higashino’s are more nuanced, so that, no matter how evilly some of them behave, we can still find room for compassion: they’re products of what has been done to them.

I see there are a couple of translated Higashino novels that I haven’t yet read; I must remedy this sometime soon. I enjoyed his The Devotion of Suspect X a lot and I very, very much liked his more GAD-style Malice, but Journey under the Midnight Sun seems almost a different ball game: very impressive in its scope and ambition, and utterly gripping, with a central character — Yukiho — who entirely captivated me.

* Now there‘s a title for your next bestselling novel! And the cover should show the back of a young woman as she walks away from us, natch.