An old woman hangs herself in a church after having vandalized the place and repeatedly scrawled ÓHReINN (“Unclean”) on the walls. The woman’s body is found to be etched all over with crosses. A local hospital psychiatrist, Freyr (Jóhannes Haukur Jóhannesson), is called in by the investigating detective, Dagny (Ásgeirsdóttir), to see if he can help explain things.

Together they establish that this death and a bunch of other accidents/suicides seem to be tied to a decades-old cold case in which a small boy, Bernódus (Hardarson), disappeared. Bernódus had been the victim of severe bullying at school and, at home, of his sadistic religious-nut father, who cut small crosses into the child’s skin. Now the bullies are dying, one by one, and subject to those same mutilations. 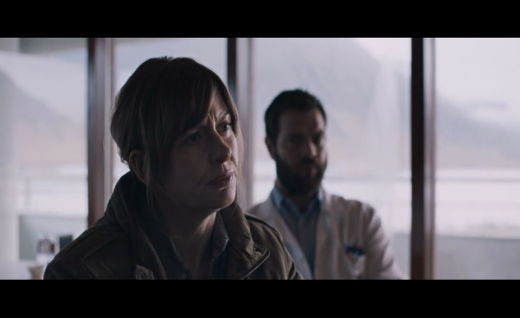 Freyr has a particular affinity for the case in that his own small son, Benni (Gudni Geir Jóhannesson), disappeared three years ago while playing hide-and-seek with his friend Óli (Kristböjdrsson). Óli is autistic, and the most information about the disappearance that anyone’s been able to get out of him is that Benni hid in the “green submarine.”

In a separate narrative strand interwoven with this, married couple Katrín (Gudmundsdóttir) and Gardar (Kristjánsson) are traveling to a deserted island with Katrín’s best friend Lif (Erlendsdóttir). There’s an abandoned hamlet there, and the trio believe that, if they can do up an old house they’ve bought for a song and turn it into a B&B, they could start a tourist boom. But very soon there starts a series of spooky events that convinces them the place is haunted, that coming here has been a very big mistake . . .

We’re going to find out, of course, that the haunting is a sort of nexus where the cases of the two disappearing boys, Benni and Bernódus, overlap. When finally Freyr and Dagny crack the truth of what happened to Benni they provide a form of release for Bernódus and indeed Katrín.

Everything about this movie, from its plot, its pacing and its soundtrack to Jakob Ingimundarson’s wonderfully moody cinematography with its muted palette, cries out “Icelandic noir!” . . . except for the fact that it’s a ghost story. It was only after I’d watched the movie that I discovered there’s a very good reason for this: the source novel was written by Yrsa Sigurdardóttir, best known for her series of noirish detective novels featuring lawyer Thóra Gudmundsdóttir. 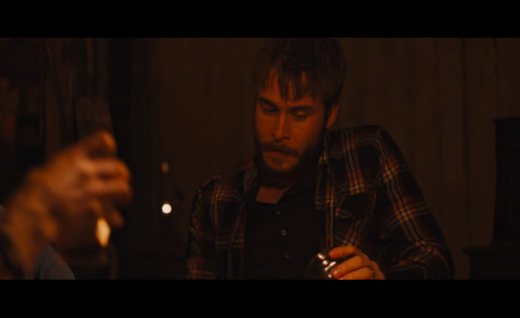 In a sense this is a tale of relationships being both in flux and not quite what we might have assumed them at first to be. Katrín and Gardar aren’t altogether the blissful couple the world sees; they’ve only just gotten back together after a longish estrangement subsequent to Katrín suffering a stillbirth. Their relationship with Lif seems mysterious, almost ménage-à-trois-like (what’s the meaning of Lif? you might ask), but once the truth’s unraveled the reality proves to be rather more dangerous than that. In parallel, Freyr’s relationship with his wife Sara (Agustsdóttir) seems irrevocably to have broken down after Benni’s disappearance. Is she forging something new with psychic lawyer Elías Björnsson (Geirsson)? Are Freyr and Dagny beginning to form a bond? And why did Bernódus’s father hate the boy so much? And, although a bizarre relationship eventually forms between Katrín and the long-dead Bernódus, has that relationship existed at an even deeper level since before Katrín was even born?

There’s a piece of narrative trickery involved, too, that keeps us from guessing, until very late in the movie, more of the truth than we otherwise might; for a moment when the trick was revealed I felt as if I’d been cheated, but at the same time I had to clap my hands in admiration at the cleverness with which I’d been hoodwinked.

There are a few horrific moments but, to be honest, if it’s horror you crave you might be better off looking elsewhere. Like all the best ghost stories, this thrives on creepiness rather than in-your-face grue. As I imply above, it’s perhaps best approached as a piece of Scandinoir that happens to involve the supernatural. As such, it’s a bit of a stunner.