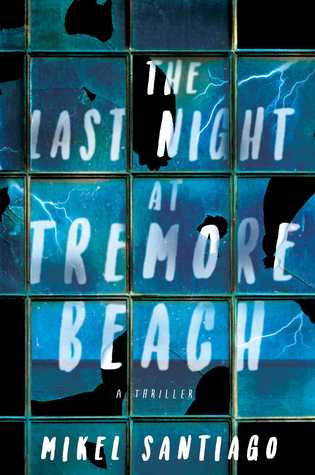 A white-knuckle thriller, the most gripping I’ve read in quite a while.

Drained of inspiration and indeed almost the will to live by the desertion of his wife, popular composer Pete Harper ends up abandoning the bright lights for the remoteness of a Donegal beach, miles from a small town/village that is itself miles from anywhere. There, with the company of only the crashing waves and the elderly couple, Leo and Marie, who live two miles down the shore, he hopes he can restore his inner self and write that masterpiece.

But, of course, inspiration fails to strike.

What does strike him, one dark and stormy night, is lightning. He survives, the only immediately apparent consequences being a soon-fading pattern of marks on his skin and an oddly persistent headache. After a night under observation in the hospital, he’s released into the arms of his girlfriend, local tchatchkes-and-yoga-classes store-owner Judie.

But there’s a further effect of the lightning strike. From time to time over the ensuing days and weeks, Pete finds himself in the midst of peculiarly powerful hallucinatory, seemingly premonitory experiences that appear all to be pointing to a horrific tragedy involving the deaths of Leo, Marie, Judie, Pete’s visiting kids and Pete himself. Has the shock to his system suddenly awakened in him his long-dead mother’s gift of second-sight? Is there any way he can avert the impending violence?

There’ve been plenty of comparisons between this novel and the earlier work of Stephen King — there’s even one in the jacket blurb — but I’m not sure how valid such comparisons are. Just for a start, although there are some horrific events in the novel and of course it has that strong supernatural element, it doesn’t easily sit into the horror genre. Instead, it’s a clever balance — and a superlatively exciting one — between psychological thriller and supernatural chiller. The supernatural aspect — Pete’s dreams/hallucinations, the precognition — is never allowed to dominate; indeed, I’d be tempted to say that, even though it plays such an important part in the tale, it does so only in service to the rest. The thrills and terrors — of which there are plenty — come not from Pete’s visions but from the very definitely real-world baddies who turn up with sadistically murderous intent, and from Pete’s amateurish attempts to thwart them and save his loved ones.

The Last Night at Tremore Beach offers a memorable thrill-ride, one that had me completely in its thrall from the opening few pages. If I have any complaints about it at all (apart from one or two minor oopsies in Carlos Frías’s otherwise very fluent translation), it’s that the final explanation of real-world events — who the baddies were, why they were there, etc. — while completely satisfying as a resolution of the plot, lasted perhaps a tad longer than it needed to. But maybe the leisureliness is fitting: it could be seen to mirror that extended quiet period after the storm has passed as the world restores itself.

Mikel Santiago has published other novels in his native Spanish that have yet to be translated into English. Why are we being made to wait? Hm?