November 1941, and US radio journalist Bill Roberts (Andrews) broadcasts regular reports home from Berlin. Despite being heavily scrutinized by the Nazi censors, these contain coded messages telling the truth about how (badly) things are faring in Germany, and revealing Nazi plans. At the New York Chronicle Bill’s colleague Red (Sande) interprets the codes and writes the stories, to the perplexity of the Gestapo.

Bill has been getting his information at a philatelical shop from elderly Rudolf Hauen (Kalser), who has picked it up over the supper table from his chatterbox daughter Karen (Gilmore), a Gestapo clerk. She’s become engaged to her evil-bastard boss Colonel Karl von Rau (Kosleck).

Von Rau, who may be vile but isn’t altogether stupid, has worked out the Bill Roberts–New York Chronicle connection, and is desperate to discover who’s been feeding Bill the secret information. Detectives like Weiner (Katch) having completely failed to keep proper tabs on Bill, von Rau sics his fiancée Karen onto him, reckoning her blondeness will lower Bill’s defenses. 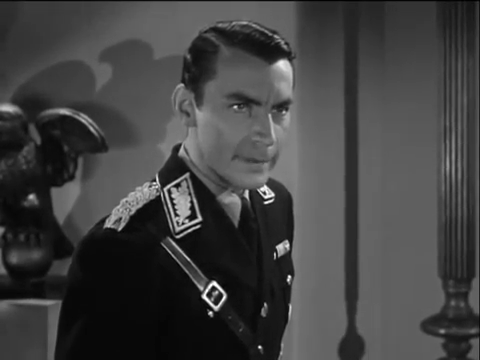 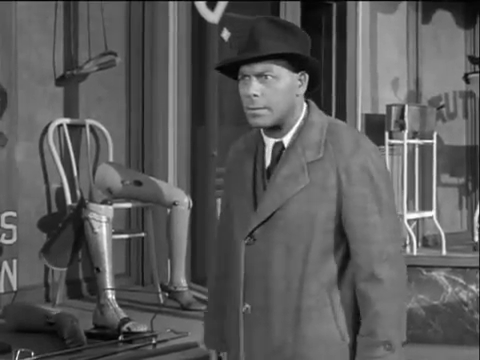 What he doesn’t reckon on is that Karen might fall for Bill. Or that the cliché “Hell hath no fury like a woman scorned” might apply to his own secretary, Fraulein Goehrer (Maris).

When Karen’s beloved dad is arrested and sent to the Heilanstalt Gründorf—supposedly a mental hospital but in reality a place where the “substandard” are euthanized under the supervision of bumbling Dr. Dietrich (Ruman)—and especially when Bill daringly engineers Dad’s escape from there to Switzerland, Gestapo-Girl Karen’s allegiances shift in more ways than one . . .

You just need to look at the date and the subject matter to know that Berlin Correspondent is one of the propaganda movies that Hollywood made around the time that the US finally entered the war—in fact, there’s a brief mention, possibly a late addition to the screenplay, of the Pearl Harbor attack. The movie’s better made than many of its ilk, but does show some signs of haste: for example, a small, swastika-covered plane that two characters use to make an escape is later shown in flight, when it has miraculously lost the swastikas and become an airliner; while a Gestapo car that plays an important plot function is left-hand drive, indicating it’s British rather than German.

Berlin Correspondent zips along with great pace, and offers splendid entertainment. What’s rather sobering is to realize how, even when exaggerating for the purposes of propaganda, Hollywood and the US public so grossly underestimated the true horrors of the Nazi regime and in particular its concentration camps. The one thing the movie gets right in this context is the wholesale slaughter of physical and mental “defectives,” but even here it assumes there’d be some effort to sanitize the murders.