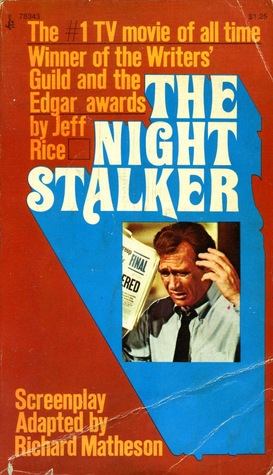 I’m in the process of assembling for the movie site Wonders in the Dark an essay on the Kolchak: The Night Stalker TV series, and thus I’m midway through watching the 20 episodes of the series. Also, as part of my brief, I’ve watched the two TV movies that preceded the series, The Night Stalker and The Night Strangler, and hope to fit in watching the ten episodes of the series’ 2005 retread, Night Stalker. Since that’s already far more work than really I ought to be devoting to the project, I naturally decided to get hold of series creator Jeff Rice’s two Kolchak novels. (I think I draw the line at the anthology someone’s put together of original Kolchak stories. Hm. I wish I’d known about it at the time . . .)

Anyway, the novel published as The Night Stalker apparently began life as The Kolchak Papers, and as such was hawked around publishers. None of them bit, but someone reckoned it might make a good TV movie. Add a screenplay by Richard Matheson to the mix and, voila!, you have the start of a legend. The screen adaptation broke all audience records to that date for an original TV movie, and all the rest is history.

But what about the novel? In case you haven’t come across the movie, the tale involves Las Vegas investigative journalist Carl Kolchak on the trail of a serial killer. The authorities, including his editor, initially decry him as a nutcase when he claims the killer must be a vampire; when it proves he was correct, they suppress the story because admitting that the Las Vegas streets have been stalked by a vampire serial killer might frighten off the punters and thus be bad for business.

Well, it’s not hard to see why publishers were somewhat lukewarm about the novel. In its favor is the fact that it’s written in the kind of hardboiled style that brings the very scent of early-1970s mass-market paperbacks to the nostrils, complete with the inked page-edges. Within that context, though, it has the problem that Rice is not an especially adroit master of the style. Where other writers could use it to make the narrative bounce along, with world-weary observations and savagely witty one-liners and put-downs to illuminate the mean streets, in Rice’s hands it all seems a trifle drab.

This problem is intensified by the fact that, even though he has plenty of plot to play with — there’s quite a lot more plot than in the movie, as you’d expect — he still has difficulty filling up his 170 or so pages, and thus resorts to some egregious bits of padding, including a completely out-of-place epilogue on the Jack the Ripper killings. All in all, then, this fairly short book seemed really quite long while I was reading it.

There are, too, some plotting difficulties — difficulties that it shares with the movie — but I wouldn’t have noticed these so much had I not been struggling a bit with the narrative.

All of that said, The Night Stalker does deserve the billing of “Vampire Classic”; like the somewhat more distinguished Dracula, it’s a novel that anyone with a serious interest in vampire literature should make a point of reading, because it’s an important example of what has come to be, I think, a dominant trope of the subgenre: the urban vampire, epitomizing the inhumanity of our major cities and the frequent alienation from each other of the inhabitants therein.