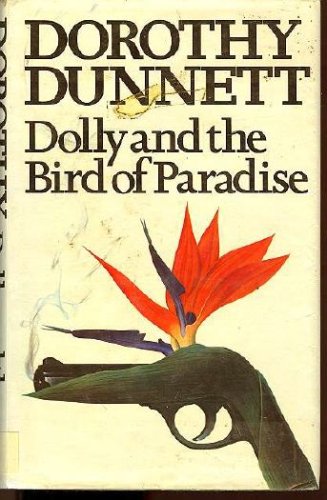 Rita Geddes — from Troon in Scotland — is a dyslexic punk who’s made her way up to become one of the best-regarded makeup artists in the world. Her friendship with flamboyantly randy photographer Ferdy Braithwaite brings her into the ambits of enigmatic portrait painter and undercover government agent Johnson Johnson and public intellectual/documentary-maker Natalie Sheridan. Soon Rita (who tells the story) finds herself in the midst of an adventure involving murder, drug-running and who knows what else that takes her to Madeira and then the West Indies, where she and her friends, aboard Johnson’s luxury yacht, Dolly, must face down a hurricane, pirates and gangsters . . .

Published in 1983 by Dunnett under her maiden name, Dorothy Halliday, this was the first, according to internal chronology, of the seven books in her Dolly/Johnson Johnson mystery series, even though the sixth to be published. I gather that each of the novels has a different narrator; what tie them together are the character of Johnson and the yacht. The books have been variously retitled; although I read this as Dolly and the Bird of Paradise it is perhaps better known under the (re)title Tropical Issue. I can remember seeing some of the Dolly novels in the bookstores when they came out in paperback, way back when, but I don’t think at the time I connected Dorothy Halliday to Dorothy Dunnett. I’m also pretty certain I never read any of them, but who can tell.

I do know I’m unlikely to read any more of them after this experimental exploration. The narration (by Rita) of Dolly and the Bird of Paradise has a sort of relentless lightness, a determined flippancy that soon becomes wearing. The plot itself is pretty ramshackle, with at least one longish episode seeming to be, so to speak, an out-take that Dunnett couldn’t bear to throw away even though it led nowhere. I’m also not quite clear as to why the criminal conspirators chose to wear animal masks as disguises for their meetings when they all knew who the others were.

I was also unconvinced by Rita’s Scottishness, despite occasional Scotticisms (most commonly the use of the adjective “wee”) stuck into the text to keep us reminded, not to mention references to her aunt in Troon. The oddity here is that Dunnett was herself Scottish (as indeed am I); you’d have thought she could have done a better Scot. In other respects, to be fair, I found the characterization of Rita quite credible.

The novel is also scarred by a sort of off-handed racism. There’s nothing that’s outright repulsive — nothing that made me throw the book at the wall — just stuff at the level where, were this a 1930s or even a 1950s novel, one would grimace and shrug at the benighted attitudes of the past. But this isn’t a 1930s or 1950s novel: to encounter descriptions like “darkies” and “wogs” in a book from the mid-1980s comes as something of a jolt, and not a pleasant one.

I’m well aware that some people enjoy the Dolly series a great deal, but for various reasons this book rubbed me up the wrong way. I don’t regret the experiment, but I’ll not be repeating it.

6 thoughts on “book: Dolly and the Bird of Paradise (1983) by Dorothy Dunnett”