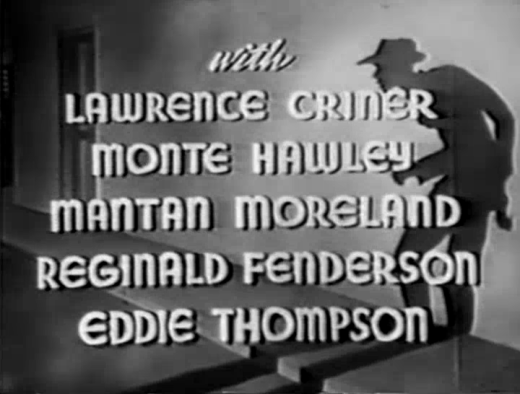 I’m sure I’ve ranted about this on Noirish before, but it’s way past time that someone made a determined effort to recover and restore the “race movies.” Made between about 1910 and the early 1950s, these typically featured all-black casts and were shown to all-black audiences, and were produced outside the Hollywood system on budgets that made Poverty Row enterprises seem positively DeMillean. Because of the cheapness, the production standards generally weren’t high and the acting could on occasion be amateurish; moreover, there was a reluctance to tackle genuine African American problems in the race movies, probably because most of the studios creating work in this genre were white-owned. Despite all this, the movies often show great verve, and some of the acting is top-notch; here you can see many fine African–American actors in leading roles who could get nothing but bit parts, often racially demeaning caricatures, in Hollywood productions.

Because the race movies flew under the radar of cinema historians until relatively recently, they were neglected to the point that only about 20% of the five hundred or so thought to have been made still survive, and most do so only in pretty appalling condition. So far as I know—and I confess a deal of ignorance here!—none of them have been restored in Criterion-like fashion. Please advise in the comments if I’m wrong. 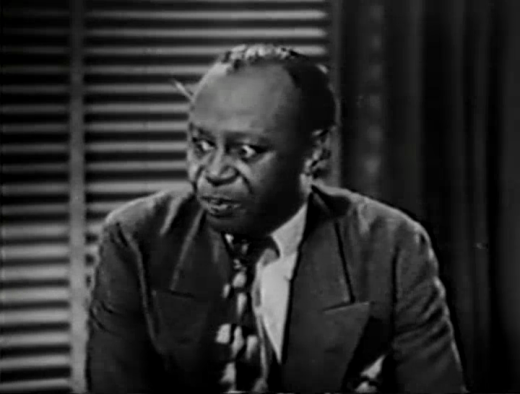 Gang Smashers is, I gather, a tad unusual among race movies in that it focuses on the relatively contentious (for the late 1930s) issue of black-on-black crime. In other words, in any other context you’d regard it as a thriller, a borderline noir. I admit it was the name Mantan Moreland that drew me to the movie; I’ve now become a fan of Nina Mae McKinney, too, and perhaps Monte Hawley as well.

I mentioned the low budgets. From the declaration in the movie’s opening credits, it’s clear that Toddy Pictures, the production company for this one, economized even on proofreading. But the declaration’s worth reading anyway:

To those colored men and women of the Intelligence Service who unflinchingly risk their lives in the interests of good government, this motion picture is respectfully dedicated. Their part in the American scene can not be overestimated—nor can their courage.

Their efforts have contributed to, in a large measure, towards this country, a safer and finer place to live in.

In the daily battle against organized crime these men and women have fought bravely, and have achieved more than victory. They have not only gained all the things which they sought, beaten the octopi which have tried to gain a stronghold on the American public, but have brought distinction to their own race.

To these unsung heroes, these silent guardians of law and order—the “Gang Smashers of America,” we give thanks, and bestow our humble praise.

Harry Popkin and his brother Leo, who produced and directed Gang Smashers respectively, were whites who had prolific careers in the race-movie genre.

We begin with a montage of stores being blown up and cop cars racing out of their precinct houses with sirens wailing. We’re in the territory of the Harlem Protective Association—i.e., a protection racket—run by the ruthless Gat Dalton (Criner) and his sidekicks Gloomy (Moreland), Nick (Fenderson) and Gopher (Hawkins). 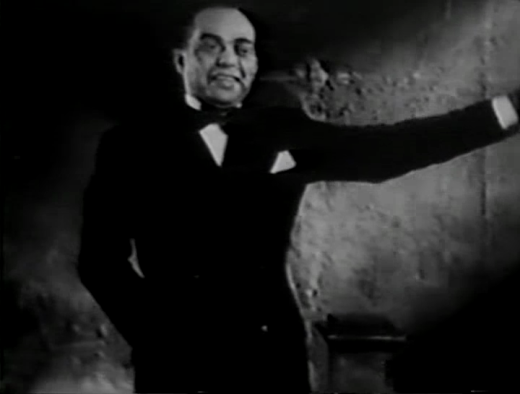 Gat Dalton (Lawrence Criner) seems to be on top of the world.

Gat owns a nightclub, the Cellar Cabaret, where the alluring chanteuse Laura Jackson (McKinney) is currently the headliner—certainly for Gat, whose feelings for her are fairly obvious and, it seems, reciprocated. But, after Gat and his goons kill a local greengrocer, Sam Bowers (Ray), pour encourager les autres, and Gat and Laura are hauled down to the precinct house by a stern Police Captain (McCalla), we discover, as Laura chatters amiably with Inspector Doyle (Thompson), that in reality she’s a police mole burrowing inside the Harlem Protective Association to get enough concrete evidence for Gat and his goons to be convicted of their countless crimes.

Gat is bringing in a deputy to run the Harlem Protective Association so that he can give himself some time off, a guy called Lefty Wilson (Hawley) who’s been recommended by one of Gat’s old gangster buds out Chicago way. In due course Lefty arrives and introduces himself, complete with a George Raft-like swagger; and it’s not long before he displays a murderous ruthlessness that makes even Gat hesitate . . . until Gat starts counting the profits from the terrorized shopkeepers. What neither man realizes is that Laura has bugged Gat’s office, and is recording all their incriminating conversations. (Her recording apparatus uses a stylus to inscribe what I assume must be wax disks, rather as earlier devices used wax cylinders. I’m unfamiliar with the recording technology of the day.) 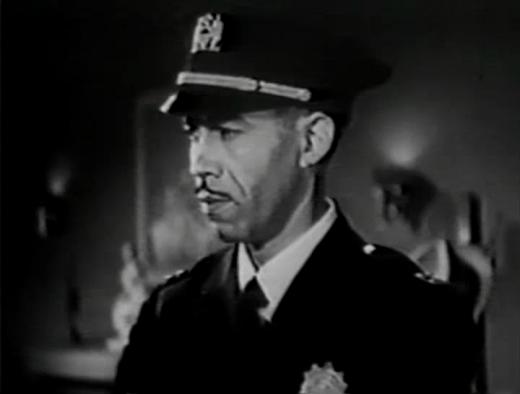 The Police Captain (Vernon McCalla) is unamused by Gat’s prevarications.

Everything’s just fine and dandy for Intelligence Service operative Laura until Lefty catches her in the act of phoning Inspector Doyle . . .

The movie’s pacing lags egregiously twice, but in one of these two instances that’s nothing to complain about. The one that is worth complaining about comes toward the end, when there’s a poorly staged car chase that has one reaching instinctively for the fast-forward button.

The other hiatus of plot occurs in the middle when suddenly, for no observable reason, we’re treated to three acts in a row at the Cellar Cabaret, and the reason it’s hard to complain is that two of the three numbers are a delight and the other is a curio. The first and greatest delight is a tremendous rendition by Neva Peoples of a really quite ambitious song for its era; the credits don’t list the song’s name but, to judge by its refrain, it seems to be called “That’s What You Get in Harlem.” McKinney conducts the Phil Moore Orchestra for this number, as she does for the next, a most extraordinary tap-dancing act by an artiste called variously Bo Jenkins and Bo Jinkins; the man is so tall and skinny that there’s the persistent illusion he’s tap dancing on stilts. And finally McKinney treats us to another song.

This is Nina Mae McKinney’s movie, no doubt about it. Neva Peoples sort of blasts her off the stage of the Cellar Cabaret, but there’s nothing wrong with the several performances singer McKinney offers us. It’s as an actress, though, that she really shines here, thanks to her very expressive features. Hawley’s impressive too. Moreland, alas, isn’t given much room for his comedy and such material as he is given is not very good.

With some neat twists in its latter half and that thoroughly enjoyable musical break in the middle, Gang Smashers may not be any kind of cinematic milestone but it’s most certainly worth a watch. And, to reiterate, I’d say it’s certainly worth restoration.