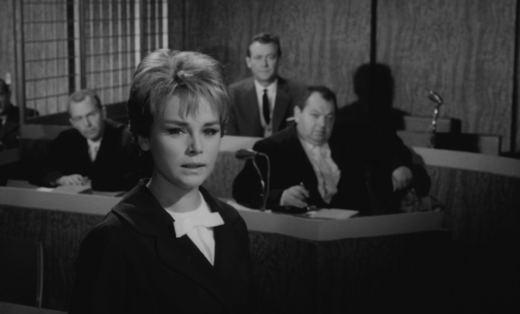 Another lovely young woman, Mrs. Laura Beaumont (Bartok), leaps to her feet and proclaims that the dead woman committed suicide: she knows because she was Frau Rüttgen’s oldest and best friend, and was there when she quaffed the fatal champagne.

Robert and the cops are incredulous. Why didn’t Laura say so at the time rather than waiting until the fifty-ninth minute of the eleventh hour? Why has she allowed Rüttgen, allegedly also a good friend, to rot in jail these past few months? She makes variously implausible excuses, but there’s no shaking her story. And, when the cops raid the German branch of the fur’n’fashions-trading company she works for, Ralph Palance et Fils, and discover she’s been using her job there as head of fashion to have nude photos taken alongside the fashion ones for use as, in effect, a catalogue for a prostitution ring, everything suddenly seems to start falling into place: she was reluctant to approach the cops for fear her sinful little scheme might be, er, exposed.

For lack of concrete evidence, the girls are released, although Laura herself is deported home to France as an undesirable. Rüttgen, too, is released; Laura’s claim has destroyed Robert’s case against him.

But there’s more. Five years ago in Saint-Tropez, Robert and Laura, who was then working as a cabaret singer in the Club Cuba Cubana nightclub, owned by Alexander Lamas (Reichmann), had a torrid nineteen-day affair that ended only when Laura abruptly dumped him.

Oddly enough, although they haven’t seen each other in a while and Alexander is evidently a bit of a “fixer” operating sometimes at the fringes of the law, Robert and Alexander have remained good friends. 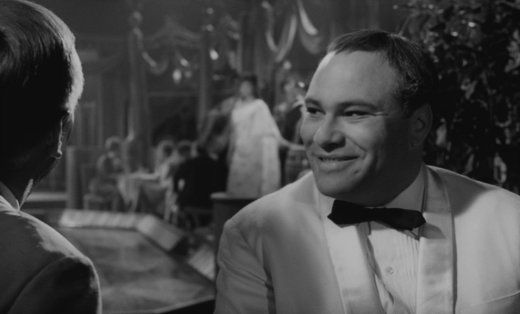 And it seems too that, having so abruptly reintroduced herself into Robert’s life, Laura is toying with the idea of picking up their passionate relations where they left off five years ago. 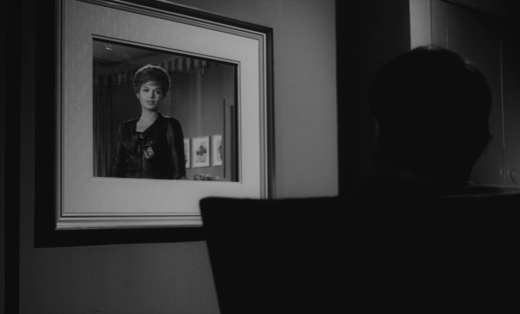 Robert, despite his engagement to Ingrid, clearly feels more than a twitch of temptation. At the same time, he believes that Palance et Fils’s fur-trading business may be the front for a lot more than Laura’s profitable sideline of naughty pix and nookie—that it’s a world leader in industrial espionage, open for hire by corporations to steal the technological secrets of other companies. When Delgasso (Fernau), boss of the company that Rüttgen used to work for, discovers that indeed someone has been taking photos of the blueprints for the new turbine that Rüttgen was developing, Robert’s suspicions seem confirmed.

An old photo tells Ingrid something she never knew about her fiance . . .

Rüttgen, meanwhile, kills himself by poison, leaving a suicide note that claims Robert’s persecution has destroyed his life and left him nothing to live for. Rüttgen’s bereaved mistress, Helga, assaults Robert in the street and loudly accuses him of having murdered her fiancé. The press is having a field day. What Robert and the reporters don’t know, but we do, is that Rüttgen was tricked into writing the note and taking the poison by François Lacroix (Peters), oleaginous boss of Palance et Fils. Both he and Laura are under the thumb of a Mr. Big, perhaps the boss of Palance et Fils, whose face we are not permitted to see.

Robert decides he must go to Paris to do some more digging at the head office of Palance et Fils. Soon enough he’s in Saint-Tropez once more—solely for the purpose of re-interviewing La Belle Laura, you understand. This involves going for a swim together—they luckily escape the attentions of a frogman, one of Mr. Big’s goons, swimming beneath them with a speargun—and afterwards conducting a horizontal police interrogation on the shore. It’s there that Ingrid discovers them, having herself flown in from West Germany to offer Robert moral support in his investigations.

The third degree with Laura (Eva Bartok) is resumed . . .

. . . and, thanks to the unflagging zeal for justice central to the worldview of Robert (Peter van Eyck), continues . . .

For some reason Ingrid doesn’t simply drop a rock on Robert’s head, which is just as well because it seems that it’s he who’s been skillfully leading Laura on, not the other way round, in order to weasel information from her about the activities of Palance et Fils. Later that evening he plants a little tape recorder in a drawer in Laura’s hotel room. That tape recorder will dramatically prove its worth during Robert’s trial for Laura’s murder . . .

The literal meaning of the movie’s German title is “The Public Is Not Admitted”—as per the sign we at one point see on a courtroom door when the court is in closed session—and I assume the title’s reference is to the secret corruption of companies like Palance et Fils and the corporations that employ them. That may be reading too much into the intentions of what’s really just a fairly humdrum mystery-thriller with a somewhat rickety plot and a fairly predictable outcome.

Jochen Blume as the French cop who investigates Laura’s murder.

Peter Van Eyck does well in the perhaps unfamiliar role of being the good guy rather than a Nazi or other form of villain—I’d forgotten until I checked just now in A Comprehensive Encyclopedia of Film Noir (note gratuitous plug) quite how many baddies he played in noir-related movies. Wolfgang Reichmann offers a first-rate turn as the Club Cuba Cubana’s owner, but really the acting laurels must go to Bartok, whose tremendous screen presence makes her the focus of any scene she’s in and utterly convincing as the alluring femme fatale; beside her, Marianne Koch’s Ingrid seems like a little girl out of her depth. At movie’s end, when, as you’d expect, Robert and Ingrid go into the final clinch, you can’t help feeling that Robert may still be yearning for five years ago.

Harald Philipp’s direction is nothing to write home about—it’s rather uninspired—and the same could be said of Friedel Behn-Grund’s cinematography: it’s perfectly functional, but not a whole lot more. Overall, then, although I personally enjoyed it quite a lot, Unter Ausschluß der Öffentlichkeit is perhaps most recommended to Peter Van Eyck and/or Eva Bartok completists.