In a pseudish modern art gallery a young man whom we’ll learn to call Valerio (Silvestrin) takes a phonecall. We hear only his side of the conversation, but it’s immediately apparent that he’s talking about a hit on his wife:

That evening he picks her up in his car, and hardly has Simona (Solarino) climbed aboard than she’s started kvetching at him: she was unfairly passed over for a promotion at the office, the buses are too crowded, she’s going to have to get a driving license whatever he says, and why aren’t they going straight home? Eventually he tells her: “Will you shut up?” It’s all pretty standard domestic bickering, underlain by obvious affection; it’s hard to relate this to the notion that he’s taken out a hit on her.

Simona (Valeria Solarino) looks round to find Valerio waiting for her.

He takes her not home but to a beach house that we assume he’s rented for the weekend—a beach house that we recognize because we saw it earlier illustrating a newspaper story about a man who killed his wife. He tells her that the weekend is his present to her for their wedding anniversary—an anniversary that, in a reversal of the stereotypical gender roles, she’s forgotten.

The bickering continues, even after the apparently delicious anniversary dinner that he cooks. She wants the two of them to go to Cuba over the Christmas/New Year break; he holds out for the customary mass family Christmas gathering that clearly she abhors: “The toilet seat is always warm from someone else’s rear.”

By the end of the evening they’re canoodling connubially and, even though he says he’s too tired to make love despite her clear invitations, it’s obvious they’re at peace with each other.

The atmosphere is spoiled for him when, as she sleeps, Valerio receives a phonecall from his mysterious contact (voice of Mondini). He tells the contact to back off. Could Valerio be having second thoughts about the demise of the wife whom, at least for the moment, he clearly loves?

The next morning she announces she’s pregnant; they squabble good-naturedly over whether they want a girl or a boy; they play on the beach where a grumpy old fisherman (Remotti) acts as a sort of sounding board for the way they feel about each other. Valerio is privately irate when he spots they’re being observed by a sinister emissary of his contact, and again demands a backing off . . .

It’s becoming increasingly clear to us that we’ve been misled—that there’s something seriously adrift about the situation. When the mask is pulled away and we discover the real truth of it all, however, we discover that the disguise has been fooling not just us but Simona and Valerio. This short movie’s later moments have a genuine romantic pathos. Even though romance and noirishness can often be mutually incompatible, here they’re inseparable: the tragic twist is the most romantic part of the piece.

La Moglie is something of a mystery movie in a different sense—in the sense that it seems to have flown under most radars. Yet the production values are immaculate (even if the editing is perhaps a tad overfancified: I’m not sure all the jumpcuts work) and the two leads are by no means negligible figures in their homeland—nor, for that matter, is the late (d2015) Remo Remotti, who had an impressively long credits list. So it’s a bit startling that the standard sources, like IMDB, have no record of La Moglie.

I found the movie at the splendid Short Film Connection site, where there are lots of other interesting shorts from all around the world. UPDATE: The version that’s now there lacks subtitles; dunno why. You can find a subtitled version on YouTube. I’d still recommend a visit to Short Film Connection for other goodies.

Simona (Valeria Solarino) sometimes inexplicably lapses into a resentfulness quite at odds with her manifest love for Valerio.

The haunting, very lovely song “Bellissimo,” which appears piecemeal through the movie and is played in its entirety over the closing credits, is performed by Ilya, a Bristol, UK, trip-hop twosome comprising Jo Swan and Nick Pullin. It can be found on their debut album, They Died for Beauty (2004), or on Ilya’s YouTube channel. If you like Portishead you’ll probably love Ilya, although Ilya has a far more chanson française ambience. They’re my new favorite band. 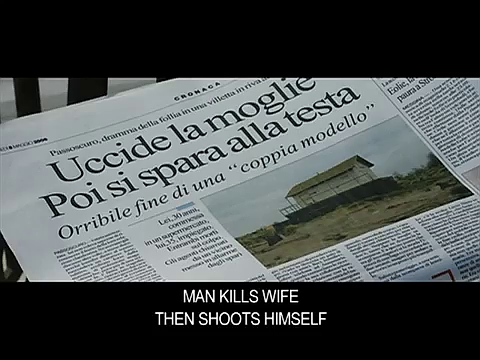